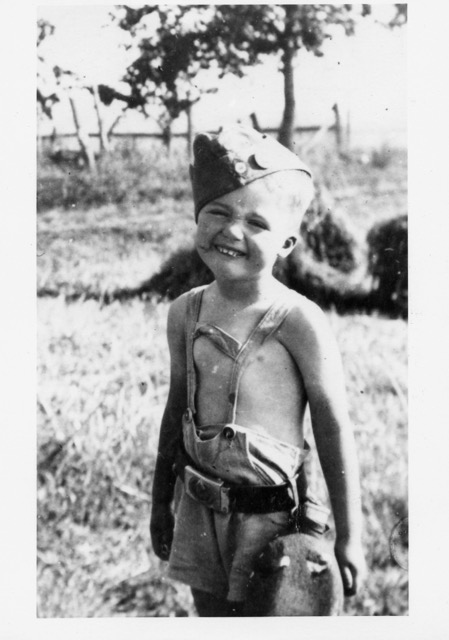 The author dressed in a fashion similar to the one Prince Harry wore to a costume party, but without the swastika armband. Kriegskinderheim, Langenbruck, Upper Silesia, 1943.
(Image by Eric-Dietrich-Berryman)   Details   DMCA

Three generations have grown to maturity since the end of the Second World War. Victorious Allies turned the page long ago and made peace with their former Axis foes. Harmony. Cooperation. Normalcy. All, that is, except Britain where an obsession with things Hitlerian and Nazi never stopped animating anti-German bias to the level of a national affliction.

Brits are fond of declaring, "When we won the war." It is their fondest myth. In truth, they survived on the winning side. Barely. The war was fought by Russians and won by America. Matussek believes that Brits continue to see all Germans as Nazis, because Brits have to refight the war every evening. They are "enchanted by the Nazi dimension."

This, he concludes, "is not a German problem, but a British one."

I come at the aberration from personal experience. My mother married a Royal Air Force cook stationed in Occupied Germany. Ducking for cover began soon after I arrived in London in the late autumn of 1947. As much for self-protection as from the need for acceptance, it was drilled into me by my parents that German was not something I should admit to, let alone wear on my sleeve. "When they ask where you're from, say Vienna," they counseled. Austria got an early dispensation and membership in the victims' club. Austrians' spirited participation on Hitler's side in the Second World War is all but forgotten.

I entered a world in which everything German was reviled. The language was vilified as guttural and harsh. The public German face when it did not look like Hitler channeling Charlie Chaplin was scarred, wore a perpetual sneer, and had a monocle screwed into one eye. German heads were square and shrieked spit-flecked cliche's: "Verboten!""Schnell!" "Sieg Heil!"

BBC coverage of the pope's visit to England was laced with footage of Hitler Youth parading swastika flags. History enslaved to prejudice and character assassination can even regenerate itself. Its reach is limitless. In 2011, the late English journalist Christopher Hitchens blamed Germany (the Kaiser this time, not Hitler) for Osama bin Laden, Islamic jihad, and the 9/11 attacks on New York City and the Pentagon.

Propaganda-fueled stereotypes and caricature infect what has been preached by British historians to a supine, ill-educated citizenry who ever accuse all Germans-no exceptions-of being criminally responsible. How else to explain Prince Harry's 2005 costume party attendance in the uniform of a Nazi officer, complete with swastika armband?

Marlon Brando as Lieutenant Christian Diestl in The Young Lions, was the first postwar film to portray a decorated German infantry officer with a pinch of sympathy. Diestl's role as a conflicted German soldier became the standard depiction. It lives on like some ghastly assemblage from Night of the Undead. In recent times, English playwright Nick Stafford's technical marvel War Horse set in World War I is historically coherent through Act One.

But Stafford is English and incapable of transcending his schoolboy indoctrination. Sense and history collapse after intermission when the central German soldier-for whom we are cued to feel a scrap of sympathy-acts out the agonized, politically misguided, post-World War II "good German" in his moment of moral epiphany. All of it in a parody of German accent that would give Erich von Stroheim a facial tic and make Marlene Dietrich collapse with laughter.

England generally and Hollywood in particular have traduced Germans for a century. Paul Bäumer's character and those of his chums in the American-made film version of All Quiet on the Western Front was not long remembered and never repeated. The inherent decency of the fictional Rittmeister in Jean Renoir's Grand Illusion vanished from portrayals of German soldiers.

It's said no conversation in Britain can start with Germany as its subject and not end with Hitler. German soldiers are all bad, incapable of goodness, generosity of spirit, or heroism. As the new century ticks along, not much has changed. Brits hang on to their stereotypes with sociopathic tenacity.

Sarah Phelps' The ABC Murders with its dark, conflicted Hercule Poirot brilliantly played by John Malkovich, tailored her story to fit national bias. She grafted a World War II atrocity (the eradication of a French village and its inhabitants) onto a unit of the Kaiser's 1914-era World War I army in the role of the massacring Nazi SS, circa 1944. Phelps is British and cannot help herself.

Matthias Matussek's brother Thomas, the German ambassador in London, sums up best: "We Germans confront the guilt and shame of our past daily, and more thoroughly and obsessively than probably any other nation on earth has done." Matthias the journalist adds, "We have learned the meaning of mourning and are determined never to allow another genocide. In contrast, our British neighbours have not learned much more than the triumphalist trumpeting of the victor."

Taken together, it all adds a pinch of Schadenfreude to the current Brexit fiasco. London gives way to Frankfurt as Europe's financial center. The horror. The horror.

Related Topic(s): Bias; History; History; Hitler; Indoctrination; Nazis; Nazism; Soldiers; Stereotypes, Add Tags
Add to My Group(s)
Go To Commenting
The views expressed herein are the sole responsibility of the author and do not necessarily reflect those of this website or its editors.