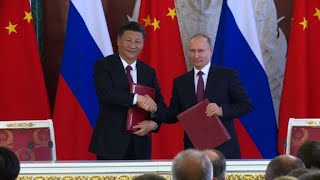 The US has a multitude of problems and issues that cry out for redress.

From the demise of domestic manufacturing and with it the outsourcing of working class, middle class income jobs, decay of the nation's infrastructure-roads, bridges, to overhauling the nation's decrepit private health care system whose costs rise exponentially as health outcomes decline, to man-made ACD, anthropological climate disruption to our endless wars-certainly not an exhaustive list- there is perhaps one issue that takes precedence because it could preclude all life on Earth and that is a US war with Russia and China.

Thus the most urgent call in the US should be, "No war with Russia and China".

It must be clearly understood in no uncertain terms a US aggressive war with Russia and China cannot be won. They are both nuclear superpowers and if attacked they will defend themselves. And if they are attacked with nuclear weapons they will retaliate and destroy the US.

The current US provocations against Russia and China are unprecedented. It's as if the cold war understanding by the US and the Soviet Union of MAD, mutually assured destruction, that neither country would contemplate initiating a nuclear first strike knowing they would be annihilated in a retaliatory strike may be in serious jeopardy particularly with the advances in so called tactical, low yield nuclear weapons-which only escalates their potential use in a hot war.

Since the demise of the USSR in 1991, NATO has expanded and advanced to the doorstep of Russia-in contravention to the verbal agreement between the Bush senior administration and Soviet Premier Mikhail Gorbachev that NATO would not move "one inch eastward" if the two Germany's were allowed to reunite-to placing so called defensive ABM missiles in Romania and Poland that can easily be reconfigured into offensive missiles with nuclear warheads, to the US Navy on the phony pretext of providing "freedom of navigation" in the South China Sea-which China sees as a direct threat, to the US withdrawing from the ABM treaty in 2002 to Trump stating he'll withdraw from the 1987 INF treaty along with plans for a $trillion dollar modernization of its nuclear weapons arsenal, by conflating a new cold war with both Russia and China with sanctions and trade wars it seems unmistakable the US intends to continue initiating provocations against both Russia and China. Until what, eventual war!?

As said previously an aggressive war with Russia and China cannot be won.

So how can such a war be averted? The Congress has essentially abrogated its Constitutionally mandated role preventing a president from going to war without Congressional authorization plus it funded every war the country has engaged in. The corporate MSM has become a complicit enabler and unofficial organ of the state in support of all US wars. The big banks, the major corporations as well as the bloated defense industry profit in the hundreds of $billions from our wars while the propaganda demonization of Russia and China as "enemies" of America has the majority of people against these so called "enemies".

What's needed is an outpouring of people in the streets, a sort of reprise of the Vietnam era anti-war protests that occurred daily mainly on college campuses nationwide against the war. They didn't include a majority of the people as there were plenty of those shouting, "love it or leave it"-America that is. But as with all effective protests in US history they were effective with the demand to end the war.

These were not single day protests as there are now when everyone goes home. They were ongoing daily outpourings from the late 1960's into the early 70's when the US finally left Vietnam in 1973. These protests caused a sitting president-LBJ-not to run for re-election and though it took a few years finally got Nixon to end the war.

So how else will the US leadership come to its senses unless there is an outpouring of Americans demanding no war with Russia and China.

As Frederick Douglas once said, "Power concedes nothing without a demand. It never did and never will".

Retired. The author of "DECEIT AND EXCESS IN AMERICA, HOW THE MONEYED INTERESTS HAVE STOLEN AMERICA AND HOW WE CAN GET IT BACK", Authorhouse, 2009
Related Topic(s): China Russia Alliance; Demonization; NATO; Propaganda; Provocation; Russia And China; Russia Bashing; Sanctions; Trade; Wars; (more...) Weapons, Add Tags  (less...)
Add to My Group(s)
Go To Commenting
The views expressed herein are the sole responsibility of the author and do not necessarily reflect those of this website or its editors.