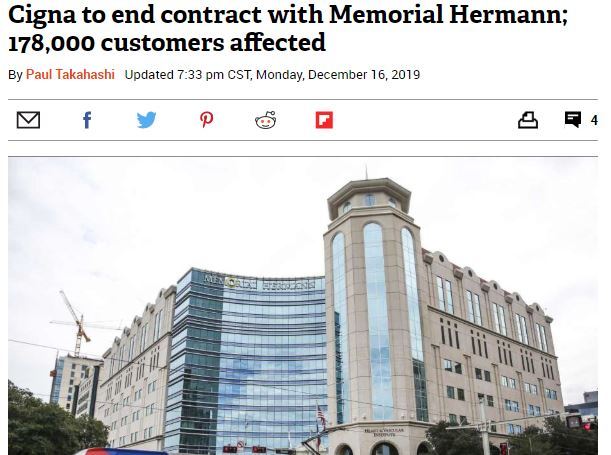 Employer or private based insurance's consistency is at best unreliable. Here's proof of why Medicare for All is the only practical solution to dependable and reliable healthcare.

As I am going through my emails I came across a "breaking news" email blast from the Houston Chronicle -- I subscribe to many newspapers and I think if we are able to we should subscribe to as many as we can to ensure their survival. The title of the story is ominous enough, "Cigna to end contract with Memorial Hermann; 178,000 customers affected" but should not be surprising. Our healthcare system makes us a useful commodity for wealth generation for the few. But packed in the short article are several discernable realities that are not all that obvious but it is all packed in the first five paragraphs.

As I explain in detail in the video,

The economic term "whatever the market will bear" is an evil term relative to your healthcare. Unfortunately, that is modus operandi of our health industrial complex (pharmaceuticals, hospitals, health insurance, and everything in between).

It is imperative that we counter the false narrative about our healthcare system. We must all step out of our comfort zone and engage in reality-based thinking instead of allowing the passive indoctrination well-designed by a plutocracy that is extracting the disposable income of most Americans. Medicare for all is the most practical mathematically provable solution to our healthcare crisis.

Egberto Willies is a political activist, author, political blogger, radio show host, business owner, software developer, web designer, and mechanical engineer in Kingwood, TX. Egberto is an ardent Liberal that believes tolerance is essential. His favorite phrase is "political involvement should be a requirement for citizenship". He believes that we must get away from the current policies that reward those who simply move money/capital and produce nothing tangible for our society. If a change in policy does not occur, America will be no different than many oligarchic societies where a few are able to accumulate wealth while (more...)
Related Topic(s): CIGNA; Employer Provided Health Insurance; Private Health Insurance, Add Tags
Add to My Group(s)
Go To Commenting
The views expressed herein are the sole responsibility of the author and do not necessarily reflect those of this website or its editors.