Everything the Trump administration does is geared toward intimidation and war. 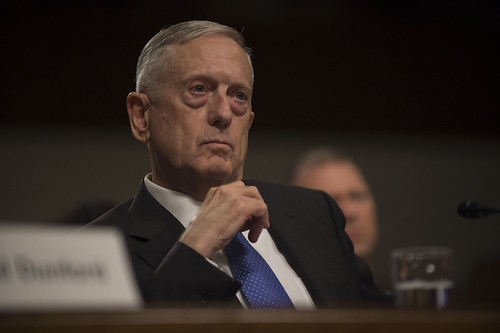 Last week, on July 26, the United States House of Representatives passed the 2019 National Defense Authorization Act, which will then go on to the U.S. Senate and finally to the U.S. president. It is worthwhile to note that 139 Democrats, including the entire Democratic Party leadership, voted for this bill. This Act provides the U.S. government with $717 billion for a year's military spending. This is $100 billion more than was spent last year (which is itself more than half of the annual Chinese military budget). No country spends money on its military like the United States. It's not long now before the annual U.S. military budget will cross the $1 trillion mark.

In fact, many suggest that if the covert parts of the budget--for the CIA, for military intelligence, for the National Security Agency and for the ongoing wars--are added in, the $1 trillion threshold has already been crossed.

Jack Ma, the Chinese billionaire, recently told CNBC that the United States has wasted $14 trillion over the past 30 years in its many, many wars. A modest estimate suggests that the U.S. war on Afghanistan -- which is ongoing since 2001 -- has itself cost over $1 trillion. After all this time and money, and after all the human suffering, it is now certain that the United States, Imran Khan's government in Pakistan and the Chinese will seek a compromise with the Taliban. Ma's statement about "waste" should be taken very seriously. A foreign policy that sows disorder and chaos, which increases human suffering, is a waste -- regardless of the benefits it might produce for the arms dealers.

Power Through the Barrel of a Gun

This week, on July 30, the United States' military's African Command (Africom) admitted that it was flying armed drones out of a U.S. base in Niamey, Niger's capital. Africom's spokesperson Samantha Reho said that the government of Niger gave the U.S. permission to do so in November 2017, and that the U.S. began to fly these armed drones in early 2018. There was no admission that the U.S. has fired any of these drones.

Very soon, these lethal drones will move from Air Base 101 in Niamey to the newly constructed Air Base 201 in Agadez. This new base is one of the largest drone bases in the world. The drones from here can travel from one end of West Africa to cover most of North Africa. Another U.S. drone base in Djibouti is able to send its lethal machines across East Africa and deep into Central Africa. In sum, with these two bases, the U.S. is able to strike targets across most of the African continent. All this with no debate in the U.S. Congress and with little care for the sensibilities of the African people.

The question of sensibility should not be sniffed at. In late March, the government of Ghana signed a military agreement with the United States. Ghana's military would get a paltry $20 million to train its troops, while the U.S. would get access to Ghana's airports and to Ghana's radio spectrum and the U.S. would be able to bring in military hardware duty-free. Eager to set up a military base in Ghana, the U.S. miscalculated the residue of anti-colonial sentiment in the country. This sentiment is the reason why the U.S. African Command is based in Stuttgart, Germany, rather than in any African country. No leader can afford to be seen to allow the United States to encroach so brazenly on the sovereignty of an African country.

It is important to underline the fact that no U.S. command headquarters is located outside Western Europe and the United States. The Southern Command, which oversees U.S. military operations in Latin America, was based in Panama from 1963 to 1997. Now it is based in Doral, Florida, having been ejected by the governments that followed the ouster of the old CIA asset Manuel Noriega. The Central Command headquarters, which monitors and directs U.S. operations in the Middle East, is located 200 miles north in Tampa, Florida. The headquarters of the U.S. Indo-Pacific Command, which oversees operations in Asia, is located in Hawaii. The people of Africa, Asia and Latin America do not want the United States' footprint to be placed so heavily on their soil. It is one thing to have to tolerate bases and joint exercises. It is another to allow the full weight of U.S. imperialism on one's soil.

Threats of One Kind or Another

There's an old adage: if you have a hammer, everything looks like a nail. The sheer scale of the U.S. military arsenal gives its political leaders a rush. They feel that they can intimidate the rest of the planet to suit their needs.

Peace does not define U.S. foreign policy. Everything is geared toward intimidation and war. Here's a scanner of recent maneuvers by the Trump administration that are contrary to a policy of peacemaking.

These are the dramatic threats. In the shadows linger worse atrocities that have become normal. The U.S. drone base in Salak, in the north of Cameroon, houses a Rapid Intervention Battalion -- a Cameroonian detachment, which has been filmed executing civilians. Last year, the Intercept reported that U.S. operatives of one kind or another had tortured prisoners at this base. There is no human rights agenda here.

Threats of the Imagination

The United States claims that it requires such a massive military and deployment in places such as Niger because of the threats not only to the U.S., but to the world. In the belt of countries that make up the Sahel region of Africa -- with Niger at their center -- there is a claim made by the West of the threats of al-Qaeda and other assorted groups. Many of these groups are indeed a threat to the people of the region, but many of them are also merely gangsters (al-Qaeda is largely a smuggler of cigarettes and weapons across the Sahara Desert). The real threats that have brought in the United States and France are elsewhere. It is worthwhile to make a list of these (based on my reporting from last year).

Related Topic(s): American Civil Liberties Union; American Hegenomy; American Military; American Terror; Empire; Iran; Korea, Add Tags
Add to My Group(s)
Go To Commenting
The views expressed herein are the sole responsibility of the author and do not necessarily reflect those of this website or its editors.