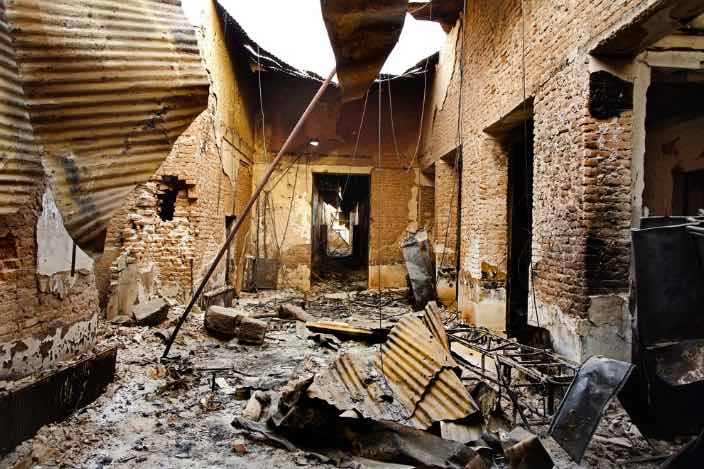 Kunduz Doctors-Without-Borders hospital attacked by US gunship. This 2015 war crime alone should have ended the US war in Afghanistan
(Image by Medicines sans Frontieres)   Details   DMCA

In 1966, during the early years of the America's war against Vietnam, Congress passed and President Johnson signed into law a Freedom of Information Act. The FOIA wasn't all that great at the time, though. Indeed, it took the courageous act of two men, Daniel Ellsberg and his co-conspirator, Anthony Russo, to to risk years in jail to steal and then copy thousands of pages of a secret US government study of the history of that war, known as the Pentagon Papers, in 1969, and to then, at great personal risk, to get them, in 1971, printed in the New York Times.

Three years later, in the midst of the Watergate scandal and Nixon impeachment, FOIA was improved and expanded. Suddenly ordinary Americans were for the first time able to file a FOIA request with a government agency like the FBI and other federal agencies and receive documents (censored of course, but still useful) like a dossier of spying on themselves (as I did), or a copy of the Federal Emergency Management Agency's latest plan for implementing martial law in the event of a "national emergency" (as I also did).

FOIA still exists, though over the course of the last three secrecy-obsessed presidencies of GW Bush, Obama and Trump, it has been severely weakened again and been violated in practice by successive administrations.

Nonetheless, it was through that Freedom of Information Act, not a couple of heroic whistleblowers this time, that the Washington Post, its lawyers and reporter Craig Whitlock obtained what are being dubbed the Afghanistan Papers. These 3000 pages of documents provide a disturbingly similar inside account to the Pentagon Papers in their documenting of how and why the US invaded one of the world's poorest countries, and has now fought a war there against its impoverished and long-suffering people for 18 years and running.

Like the Pentagon Papers of over half a century ago, the Afghanistan Papers present a tale of epic deception: self-deception on the part of presidents and their top advisors and cabinet officers, deception of government leaders and members of Congress by generals and government bureaucrats seeking to inflate their reputations, resumes and rank, and deception of the American people by virtually everyone government.

The basic takeaway from the Afghanistan Papers is that for the past two decades, virtually everyone involved in this longest war in US history, with the exception of some brave, honest soldiers like those in Iraq Veterans Against the War (!VAW), has been simply making stuff up to make it appear to the public as if the US were somehow always, if not winning, then "making gains." This logical impossibility (how can a military keep "making gains" while always losing ground, or at least not failing to gain ground?) was obviously quite a challenge. After all, the truth has been that, despite over $1 trillion in military spending and 18 years of epic bombing and killing by advanced US military forces equipped with smart bombs, night-vision equipment, a massive airforce and limitless use of surveillance and attack drones, the primitive fighters of the Taliban and their allies, armed with nothing but AK-47s and even older rifles, home-made mines and a gritty willingness to die for their cause, have been battling the mighty US to a standoff, and are even winning. Eighteen years on, the Taliban control more Afghan territory and even more towns and cities than at any time since the US invaded and pushed them out of Kabul in 2001. Today, the US is nowhere closer to defeating its purported enemy in Afghanistan than it was when it charged into Afghanistan with Special Forces and an aerial blitz on October 7, 1991. Today, if the US were to pull out of Afghanistan, the Taliban would likely take over the whole country, including the capital of Kabul, within a matter of months.

When the Pentagon Papers became publicly available back in June, 1971, their impact on public support for the war was enormous. This was not so much because of the revelations included in the documents. Much of the information revealed was already known thanks to an aggressive media, gritty on-the-scene reporters, and especially because of a dedicated alternative media keeping the major media honest. Perhaps more important was the environment they arrived in. The Pentagon Papers were published at a time that the war was turning sour. The bodies of American soldiers being flown home in bodybags was soaring, Everybody in the US knew someone or had some relative who had lost a son, husband or father. US troops in Vietnam, and even onboard US Navy ships in the Pacific were in open revolt, with the fraggings of over-zealous junior officers by enlisted men, and the refusal of units to obey orders to deploy, becoming epidemic. Angry draftees were returning from tours of duty telling of war crimes they'd seen or even been forced to commit, and of a war that was being lost and fought for nothing against people just trying to defend their country and free it from colonial subjugation. The US at home was being torn apart by urban rebellion, massive protests and student strikes and the fatal shooting of protesters by the National Guardsmen and police. Also important, much of the US media had begun to turn against the war.

The situation today is totally different. The Afghanistan Papers obtained by the Washington Post and reporter Craig Whitlock, while in many ways as revealing and infuriating as were the Pentagon Papers, are arriving in a different America -- an America where there is virtually no organized peace movement (and certainly not one willing and large enough to face down police and shut down cities), an America whose news media are complicit in the country's wars, even shamelessly hiring retired generals (often who sit on and receive fat paychecks from the boards of companies that sell arms to the Pentagon!) to serve as "commentators," an America that has an all-"volunteer" military of men and women who signed up to fight and who, even if they don't agree with what they're doing, feel like they signed up for it, an America where the citizenry rarely even thinks about the wars, which are carefully kept at a distance by the government, are fought largely from the air, are talked about little, and are funded with borrowed money instead of taxation.

America's wars are largely an afterthought in the media and in the minds of the American public.

I hope I'm wrong, but I am afraid that the like many good investigative pieces about America's imperial war machine (my own on the Pentagon's $21-trillion accounting fraud included), Whitlock's expose' of the massive deception that is the Afghanistan War will sink into oblivion with little impact on the course of that terrible conflict.

Absent a committed peace movement, a disgruntled and recalcitrant military rank-and-file, and equally important, an adversarial media willing to call out the shills and crooks, corporate lobbyists and demagogues who promote this and other endless wars, there will be no end to them.

Indeed, as some have already pointed out, there would be no need for the Washington Post's belated Afghanistan Papers expose' had the Post and other mainstream media not been for years shamelessly promoting the scare stories of a global terrorist threat, an Iraqi threat, a Russian threat, a Chinese threat, a Syrian threat, a Libyan threat and other pulse-pumping nonsense. If the Post and other major news media outlets had been pursuing the truth over the years about these all the wars, and the so-called "War" on Terror, instead of leaving the hard work of exposing all the lies to the likes of whistleblowers like Chelsea Manning and Edward Snowden and journalist/whistleblower publisher Julian Assange, we'd already know all about the venality and culpability of our government.

In fact, no sooner did the Post publish its "expose'" than the House yesterday, with no sense of irony at all, passed the 2020 National Defense Authorization Act measure. The vote was 377-48, with 188 Democrats joining virtually all Republicans in voting for it. The NDAA bill, which will surely also pass the Senate and become law, provides a record $738-billion for the Pentagon through the current 2019-20 fiscal year, including funding for the US-backed Saudi war on Yemen and the creation of President Trump's new US Space Force. The latter measure is guaranteed to spark a hugely costly and dangerous new arms race in space with both Russia and China, while Yemen is simply the latest murderous outrage by the US military against an impoverished population. All the lies that were illustrated in the Post article about the sorry history of the US Afghan War, and many new ones are being trotted out again in support of these new war-mongering measures and of the an extraordinary and appalling waste of hundreds of billions of taxpayer dollars.

Related Topic(s): Afghanistan Massacre; Afghanistan Papers; Afghanistan War; Journalists Embedded; Media Collusion; Media Independent, Add Tags
Add to My Group(s)
Go To Commenting
The views expressed herein are the sole responsibility of the author and do not necessarily reflect those of this website or its editors.