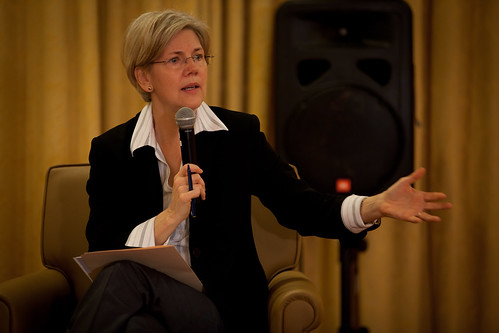 As the United States approaches the critical November 6th midterm elections, Democratic candidates convey three themes: costs, wages, and corruption. While aspects of the corruption theme are readily apparent -- almost every week some Republican big wig is indicted for corruption, what has been lacking is a "big picture" proposal to address inequity. Now, Massachusetts Senator Elizabeth Warren has proposed a sweeping reform of capitalism.

Democrats have winning messages on costs and wages. Costs because consumer prices are increasing for health care, housing, and energy. Wages because Trump's economic policies have increased corporate profits but this hasn't translated to more money in the wallets of working families. (Republican largesse has enabled corporations to raise their dividends, increase CEO salaries, and buy back their stock; but it hasn't benefited their employees.)

Although these events support a Democratic campaign narrative of "rot at the top," they do not address what is really happening in American society: Capitalism is failing working Americans. (One of 2018's savage ironies is that Donald Trump, who ran as a populist candidate, has abandoned America's workers.)

That's why Senator Elizabeth Warren's proposal, The Accountable Capitalism Act (https://www.warren.senate.gov/newsroom/press-releases/warren-introduces-accountable-capitalism-act? ), is important: This act seeks a fundamental reform in capitalism; one that will make capitalism work for all Americans -- not just the top 1 percent. Senator Warren noted that in the last forty years there has been a fundamental shift in the relationship of large corporations and American society: "In the early 1980s, large American companies sent less than half their earnings to shareholders, spending the rest on their employees and other priorities... But between 2007 and 2016, large American companies dedicated 93% of their earnings to shareholders. Because the wealthiest 10% of US households own 84% of American-held shares, the obsession with maximizing shareholder returns effectively means America's biggest companies have dedicated themselves to making the rich even richer." Warren observed, "Real wages have stagnated even as productivity has continued to rise. Workers aren't getting what they've earned."

To change corporate behavior, Senator Warren's Accountable Capitalism Act has four components. 1. Charter Reform. "Big corporations that make more than $1 billion a year in revenue would need to get new charters from the federal government. Those new charters would make it clear that the companies must consider the interests of their workers -- and other people affected by the company -- not just shareholders." In other words, corporation would need to consider the needs of their employees; not just the need for equitable wages but other needs such as healthcare and childcare -- and environmental safety.

2. Worker Participation: "Workers would elect at least 40% of board members for big corporations -- giving them seats at the table when big decisions need to be made." It's estimated that this would affect 3500 public US companies -- and hundreds of private companies.

3. CEO compensation: "Top corporate executives are now compensated primarily in company equity, which gives them huge financial incentives to focus exclusively on shareholder returns. To make sure CEOs are focused on the long-term success of the company, rather than the short-term interests of shareholders, executives at big corporations wouldn't be able to sell company shares for at least five years after receiving them -- and for at least three years after a stock buyback."

4. Political Contributions: "Corporate executives wouldn't be able to use company dollars to make political contributions unless they got approval from 75% of directors and shareholders. This ensures any political expenditures benefit all corporate stakeholders."

5. Consequences: "Permits the federal government to revoke the charter of a United States corporation if the company has engaged in repeated and egregious illegal conduct. State Attorneys General are authorized to submit petitions to the Office of United States Corporations to revoke a United States corporation's charter. If the Director of the Office finds that the corporation has a history of egregious and repeated illegal conduct and has failed to take meaningful steps to address its problems, she may grant the petition."

Senator Warren's proposal is likely to get little traction in a Republican-controlled Congress. Nonetheless, it's an important idea. One that should get the attention of all Democratic candidates. We have to reform American capitalism and Elizabeth Warren has suggested a significant first step.

Bob Burnett is a Berkeley writer. In a previous life he was one of the executive founders of Cisco Systems.
Related Topic(s): Capitalism; Corporations; Corruption; Corruption; Democratic; Earnings; Economic; Elizabeth Warren; Massachusetts; Policies; (more...) Republican; Work; Work; Workers, Add Tags  (less...)
Add to My Group(s)
Go To Commenting
The views expressed herein are the sole responsibility of the author and do not necessarily reflect those of this website or its editors.