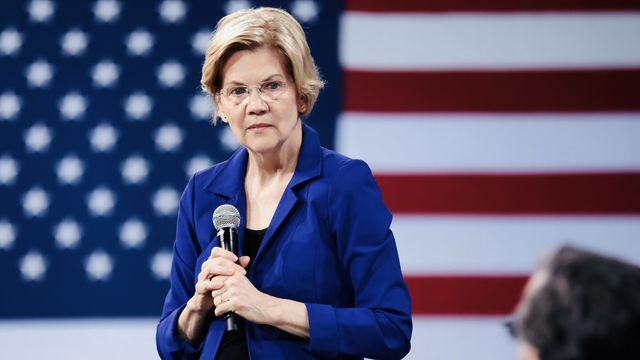 In a statement issued January 29, Senator Elizabeth Warren, a leading candidate for the Democratic presidential nomination, called for a massive effort to impose internet censorship during the 2020 presidential election.

She also pledged that a President Warren would push for "tough civil and criminal penalties" on social media platforms and websites that publish misleading information about when, where and how to vote, or that engage in any conduct to suppress or discourage voter participation.

While billed as an effort to bar voter suppression and other "dirty tricks" frequently engaged in by right-wing groups -- such as sending emails to minority voters giving them the wrong date for an election, so they miss the opportunity to vote -- this initiative has far more sweeping implications.

"Disinformation and online foreign interference erode our democracy, and Donald Trump has invited both," Warren said in a tweet Wednesday, which effectively portrayed her initiative as an extension of the impeachment trial in the Senate. "Anyone who seeks to challenge and defeat Donald Trump in the 2020 election must be fully prepared to take this on -- and I've got a plan to do it."

In a further statement, she declared, "Anyone who seeks to challenge and defeat Donald Trump in the 2020 election must be fully prepared to take on the full array of disinformation that foreign actors and people in and around the Trump campaign will use to divide Democrats, suppress Democratic votes and erode the standing of the Democratic nominee."

This language is so vague that it could easily encompass criticism of the Democratic Party and its nominee, appeals to vote for a third-party candidate, or declarations that the difference between the Democrats and Republicans is so insignificant that it is not worth casting a ballot.

Warren called on Facebook, Google, Twitter and other social media platforms to step up their efforts against "disinformation" and "fake" or "manipulated" content. Who decides what is false content, however, she did not specify -- but obviously, that would be the corporate-controlled media monopolies and the US intelligence agencies.

And she said that if elected president, she would seek sanctions against countries, including Russia, that used online propaganda to undermine US elections. She said nothing about the operations of the US military-intelligence apparatus, which engages in propaganda, subversion, electoral manipulation and outright criminality in countries around the world -- as well as at home.

Warren placed her plan to combat online disinformation within the context of the anti-Russia campaign waged by the Democratic Party for the last three years, in part directed against Trump, who was said to be the beneficiary of Russian intervention in the 2016 election, but aimed more generally against opposition to the Democrats from the left, including socialist candidates and the Greens.

Former presidential candidate Hillary Clinton has ascribed her electoral defeat in 2016 to Russian intervention, despite the fact that the alleged Russian electoral operations on Facebook involved a total expenditure of $70,000, a drop in the bucket in a $5 billion campaign, in which Clinton substantially outspent Trump because she had much greater support from Wall Street and corporate America.

Clinton also branded the 2016 Green Party presidential candidate, Jill Stein, a "Russian asset," claiming her campaign took votes from the Democrats in key states like Michigan, Wisconsin and Pennsylvania, which were critical for Trump's victory in the Electoral College.

The Washington Post, in describing the alleged online propaganda efforts to which Warren was responding, included the activities of Warren's Democratic rivals, noting particularly that "backers for Sen. Bernie Sanders (I-VT.) and his 2020 bid have been some of the most aggressive online, weaponizing features on Facebook to share viral, hostile memes about his fellow Democratic contenders."

The choice of words is significant -- "aggressive," "weaponizing," "hostile" -- effectively accusing Sanders supporters of engaging in criminal conduct for voicing their political opposition to Warren, Biden and other candidates.

The Post also reported that the Democratic National Committee is sending "top cyber-security and disinformation experts" to Iowa "to help protect the caucuses against digital attacks from Russia and other US adversaries."

Patrick Martin writes for the World Socialist Website (wsws.org), a forum for socialist ideas & analysis & published by the International Committee of the Fourth International (ICFI).
Related Topic(s): Censorship; Elizabeth Warren; Internet Political Use; Internet Regulation; Issues; Propaganda; Sanctions, Add Tags
Add to My Group(s)
Go To Commenting
The views expressed herein are the sole responsibility of the author and do not necessarily reflect those of this website or its editors.