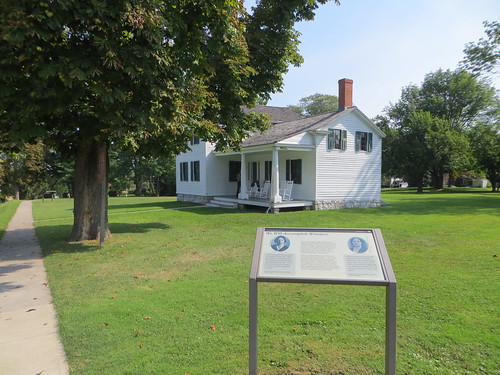 The struggle for women's rights in America was launched largely by one brilliant, determined activist who waged the battle for a half-century.

Elizabeth Cady Stanton was born in Johnstown, New York, and raised in a climate of religious severity. She was gifted, but few schools of the early 1800s admitted females; so Elizabeth's father, a judge, arranged for her to attend male-only Johnstown Academy, where she won second prize in Greek. Since no degree-granting colleges were then open to women, she attended Emma Willard's academy at Troy, New York. Studying law with her father, Elizabeth was outraged by the many laws denying women the right to own property or control their lives. Her study could not lead to a career, because women were forbidden to practice law.

Denied access to other fields, Stanton became active in the abolition and temperance movements. She married an abolitionist lawyer in 1840 and accompanied him to London to a world conference against slavery. Women delegates were refused recognition, however: renowned clergymen contended that the will of God forbade their participation. But the convention allowed the two American women attending, Stanton and Lucretia Mott, to sit behind a curtain and hear the proceedings, without speaking. This experience bonded them in a determination to fight for equality for women.

Back in America, they called an 1848 conference that marked the start of the modern women's movement. Stanton sought the right to vote, as the key to other rights. Mott felt this demand was too drastic, but Frederick Douglass exhorted both delegates to pass a suffrage resolution.

Three years later, Stanton met Susan B. Anthony, a Unitarian social activist, and they became a team crusading tirelessly for women's rights through the last half of the nineteenth century. They were joined by fellow Unitarians Lucy Stone and Ralph Waldo Emerson, and other reformers. The advocates met scorn, ridicule, threats and even violence, but never ceased their speeches, writings, meetings and court challenges.

As she struggled for equal rights, Stanton often scoffed at supernaturalism and called religion a millstone around the necks of women.

Stanton had seven children and a happy home life. She died eighteen years before America finally ratified the Nineteenth Amendment to the Constitution, allowing women to vote.

"The memory of my own suffering has prevented me from ever shadowing one young soul with the superstitions of the Christian religion." - Eighty Years and More, 1898, p. 26

"I found nothing grand in the history of the Jews nor in the morals inculcated in the Pentateuch. I know of no other books that so fully teach the subjection and degradation of women." - ibid., p. 395

"How anyone, in view of the protracted sufferings of the race, can invest the laws of the universe with a tender loving fatherly intelligence, watching, guiding and protecting humanity, is to me amazing." - letter to Henry Stanton, Aug. 2, 1880

"The religious superstitions of women perpetuate their bondage more than all other adverse influences."- Be Reasonable: Selected Quotations for Inquiring Minds, Prometheus Books, 1994

"The Bible and Church have been the greatest stumbling blocks in the way of women's emancipation." - Free Thought magazine, September 1896

Related Topic(s): America; God; Laws; Men; Religion; Rights; Women, Add Tags
Add to My Group(s)
Go To Commenting
The views expressed herein are the sole responsibility of the author and do not necessarily reflect those of this website or its editors.