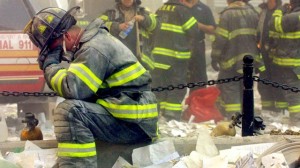 There are many areas to explore on this tragic anniversary of the 9-11 attacks, but one that deserves further discussion is the plight of those who are still suffering negative effects from the scene.  It took eleven years, but there is finally some help for victims and first responders who developed cancer as a result of their exposure to toxins from the fallout at ground zero. ABC news has this report:

"The World Trade Center Health Program will now provide treatment and compensation for first responders from 9/11 victims who were diagnosed with cancer after inhaling toxic dust at Ground Zero, program administrator Dr. John Howard announced Monday. But many first responders say they consider the expansion bittersweet.

"Cancer had not previously been part of the James Zadroga 9/11 Health and Compensation Act, which set aside $4.3 billion to treat and otherwise compensate 9/11 victims. It included asthma, carpal tunnel syndrome and lower back pain, but not cancers because the cancer link to the dust cloud and debris that hung over lower Manhattan was unclear.

"'They're only about ten years too late,' said Jeffrey Stroehlein, who retired from the New York Fire Department in May 2011, two months after he was diagnosed with a type of brain cancer that affects the central nervous system. 'I'm watching people die of these diseases, these ailments, as they go on and play ping pong,' he said of government officials arguing over whether cancer should be included in Zadroga Act coverage.

"Overall, about 40,000 Sept. 11 responders and survivors receive monitoring and 20,000 get treatment for their illnesses as part of the Zadroga Act's health program. The FealGood Foundation, founded by first responder John Feal, lists 341 9/11-related cancer deaths to date among first responders."

How is it our government could act so quickly in retaliation with military force against Afghanistan, but it took over a decade for the tens of thousands of heroes and other survivors to receive assistance with their medical needs?  Speaking of the longest war in American history, children who were in elementary school when the attacks occurred are now fighting and dying on the battlefields overseas. That's a separate tragedy unto itself.

To those who argue that the so-called "conspiracy theorists" who question the official story about 9-11, Jessie Richards of tvnewslies.org would like you to consider the essay posted there. Read it.

Kathy never expected a career in radio as a talk show producer. Born and raised in Atlanta, Georgia, Kathy was completing her nursing degree when in 2001 - in an emergency - she was asked to fill in as the producer of Mike's program. Within a few (more...)
Related Topic(s): 911 Anniversary; 911 Health; Cancer, Add Tags
Add to My Group(s)
Go To Commenting
The views expressed herein are the sole responsibility of the author and do not necessarily reflect those of this website or its editors.