My guest today is Joanne Lukacher, President of the Election Transparency Coalition's Advisory Board. Welcome to OpEdNews, Joanne. There are lots of interesting developments in New York State following the elections in November. Would you care to bring us up to speed? Why should the rest of the country care about what is going on in  New York? 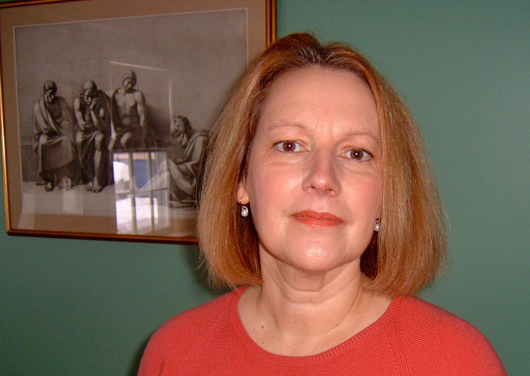 Joanne, print of Job and His Friends in background

Thank you, Joan. While 49 states have previously depended on computers to count most or all of their votes, New York just went through its first election year with a computerized system, in this case an optical scan system, which means voters cast their votes on paper ballots which are then 'counted' by computers. Computers that are error-prone and can easily be rigged or hacked.

Before 2010, for about 100 years,  New York elections were conducted on lever voting machines. The lever machines proved to be very dependable and transparent. Any tampering  with a lever machine actually leaves visible physical evidence, so such tampering has historically been quite rare.

Even though the so-called Help America Vote Act, the federal law that pushed most states into computerized voting, specifically allowed lever machines, the New York State legislature passed a law that forced computerized vote-counting into every county. Counties were forced to replace systems that they owned and that worked very well with much more expensive systems that don't provide the constitutional protections New Yorkers are used to and all people deserve.

Of course, there have been problems with the new machines all over the state. It's hard to say the magnitude of the problems because, as you know, Joan, some of the worst problems that happen when computers are used to produce vote totals are invisible. The public can't see them, the candidates can't see them, even the election officials can't see them.

This is why one county, Columbia, in the Hudson Valley, actually refused to use the computer to total their votes. They counted the votes by hand. It took longer and required quite an effort to protect the chain of custody of the ballots and other election materials, but they did it. We hope other counties will follow their lead.

In Nassau County, on Long Island, there was a race for State Senate that was very, very close. Eighty-five thousand votes were cast, and according to the computers Republican Jack Martins got only 451 votes more than incumbent Senator Craig Johnson, a Democrat. Johnson went to court to request a full hand count. The courts - and it went all the way to the highest court in the state, the Court of Appeals - refused to grant the full hand count. Meanwhile, though - and I think you'll find this fascinating - the legally-mandated auditing of the election continues. For the required audit, the county must count the paper ballots that correspond with 3% of the machines. That has been done, and because of the anomalies found, they had to increase the sample size. As more anomalies are found, it's probable that the audit will have to be broadened repeatedly and may eventually result in that 100% hand count that the courts refused to grant. However, the election has already been certified. So we could conceivably have a situation where we discover that the announced winner of the District 7 New York State Senate seat is not actually the candidate who got the most votes. What will happen then? We don't know.

This raises all kinds of questions.  You have a court stopping the count and the possibility of a final outcome which is different from the "official" count which resulted in the swearing in of the wrong candidate.  This has echoes of Florida 2000, doesn't it?

It certainly does. Most people don't know that the votes were eventually all counted for the Florida 2000 presidential election, not by the government but by a consortium of newspapers. And it was found that Al Gore did receive more votes than George Bush. By the time that information was released, Bush had been in office for nearly a year.

That's a pretty large and disturbing fact to be swept  under the rug. A 3% audit is triggered by close races.  But, because what goes on inside these computers aka electronic voting machines is unknowable, there's absolutely no transparency and we can't actually know if a race is really close or not, or if the results are remotely accurate. It's what Brad Friedman calls "faith-based voting."  So, there could be many or most races that will never be re-examined to validate or confirm the official record. Isn't that very problematic, not just for specific candidates, but for the running of  democratic elections?

Election audit laws vary by state. In NY, a spot check of 3% of the machines is required for all races regardless of vote count. But a 3% spot check is close to useless in almost all cases. The chances are much, much too high that the most serious problems will be missed. Had the Supreme Court (which is actually not the highest court in NY, which I know is confusing) allowed the expert testimony to be given in the NY case, they would have heard that in an election this close, auditing 90% of the machines would have been necessary to achieve 90% assurance that the correct winner had been chosen. And that's if the 90% audit found the results to be error-free! Because in this case even a 3% check found problems with the machine count, 100% of the machines would have to be audited. But the court did not allow the experts to testify.

I agree with you, though, that basing post-election auditing procedures like audits on the closeness of races is extremely problematic when the margin is determined by technology that can be manipulated in ways that change the vote counts.

Where do you at the Election Transparency Coalition come in?

We at the Election Transparency Coalition tried for repeal of the state law, which is called the Election Reform and Modernization Act, or ERMA for short. We worked with county governments and got about 20 of them to ask the state to repeal the law, but nothing happened. We have been simultaneously working to bring a suit to challenge ERMA on constitutional grounds. It's not too late to bring this suit even though the new machines are in place. Meanwhile, we're supporting Nassau County's lawsuit against the State. Much of the background for that suit was provided to Nassau County by ETC, based on years of research by attorney Andi Novick and others. The Nassau lawsuit covers some very important points about election security and violations of constitutional rights. But the county is limited in what issues it has the standing to raise. Our lawsuit, the lawsuit by voters, is needed to raise some of the questions involved, particularly those related to the right to vote, which of course is a right individuals have but a county does not.

Our lawsuit is ready to go. What we need now is the volunteer legal team or law firm to carry it through. It's our goal to get the first court ruling in the U.S. that declares secret vote counting (such as happens inside computers) to be unconstitutional. If we can get such a ruling in New York, it could be used to seek similar rulings in other states.

How does one get lawyers well-versed in this area of law to step forward?  Do they need to be licensed in New York?

We need representation by New York attorneys, though out-of-state attorneys could certainly help with the case. Expertise in constitutional law is at least as relevant as expertise in election law. The Election Transparency Coalition is hopeful that the SD7 situation will raise consciousness about the problems with the new election system in a way that will make law firms more interested in taking this high-profile impact case on a pro bono basis.

Where are the media and progressive organizations in all this?

I think we're far from being able to count on the corporate media to get messages about justice out to the public. There's much more work to be done on the grassroots level. One of the huge and continuing disappointments faced by those of us working on the integrity of election systems, both in NY and in other states is that more established, larger organizations whose missions should lead them directly to a platform of true election integrity have not been supportive. For example, groups like Common Cause, People for the American Way, and the ACLU support optical scan voting systems as a way of avoiding the use of DRE (usually touch-screen) systems. They really don't seem to understand that the computers used in op-scan systems are as riggable and hackable and prone to failure as are the DREs.

We hear over and over again that with op-scans, at least there are paper ballots that can be counted when necessary. But paper ballots are rarely counted, even when there are strong indications that the computer count is wrong. The so-called "good government" groups have not taken that reality into consideration, as far as I can tell.

That is bad news and really a pity. So, tell us, Joanne. What can people do to help?

If you're a member of one or more of the "good government" groups, educate them about the dangers of electronic vote-counting including of votes cast on paper but counted by optical-scan systems. Talk with leadership of your local chapters about how to get the national groups to change their positions. This could really make a big difference, as these groups hold a lot of sway.

Particularly if you're in NY state, find out what the situation is in your county with regards to the voting system. If the election commissioners or a few county legislators are unhappy with the new system, they may be ripe for hand-counting the next election, as Columbia County did in 2010.

For either of these projects, the Election Transparency Coalition can provide you with the materials you'll need and help with strategy and approach. Contact us through our website.

If you are an attorney or know an attorney in a firm potentially interested in taking our case, we want to hear from you as well. I truly believe that the combination of the Nassau County lawsuit and the lawsuit the ETC has prepared provide the best opportunity this country now has of stopping the continued computerized corruption of our elections.

Thanks so much for talking with me, Joanne. Good luck with the lawsuit. Please keep us in the loop!