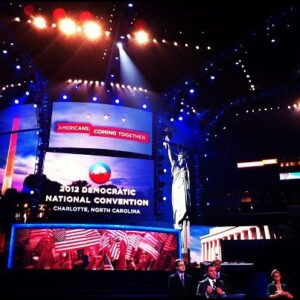 In this glittering era of punditry politics, tonight we can join the media as they continue the countdown to the November elections!

The Democrats have congregated in Charlotte NC and promise a very different message from the GOP fiasco in Tampa.  Unlike the Republicans, they know to keep their crazy uncles under wraps, so don't expect any Clint Play Ditzy For Me Eastwood "empty chair" addresses this week.

What can you expect? According to the pundits that be, a more positive message than heard previously, as the LA Times reports:

"At a background briefing for reporters Tuesday morning, organizers stressed that 'forward' will be the theme when the Democratic National Convention kicked off here Tuesday night, vowing that the tone will offer a sharp contrast to last week's Republican gathering.

"While there are sure to be critiques of the Republican ticket, they will be 'substance-based,' officials insisted.

"The headliners of the night include Massachusetts Gov. Deval Patrick, who will describe what it was like to inherit 'Romney economics,' contrasting the Republican's record as governor of Massachusetts from 2003 to 2007 with the national policies Romney now embraces."

The Times also points out that the Democratic goal is straightforward and twofold...

"The 10 p.m. (Eastern) hour, which the broadcast television networks will carry live, will feature a keynote address by the young mayor of San Antonio, Julian Castro, a rising star in the party, followed by First Lady Michelle Obama. She is expected to talk about the president 'as a husband, as a father, as a friend,' a campaign official said, and speak to the values that shape his decisions.

"The back-to-back speeches by Castro and Michelle Obama underscore one of the major strategies Democrats have this week: to run up their advantage among Latinos and women."

Kathy never expected a career in radio as a talk show producer. Born and raised in Atlanta, Georgia, Kathy was completing her nursing degree when in 2001 - in an emergency - she was asked to fill in as the producer of Mike's program. Within a few (more...)
Related Topic(s): Election-Voting Issues News; Elections And Campaigns; Latinos; Pundits; Speeches; Women, Add Tags
Add to My Group(s)
Go To Commenting
The views expressed herein are the sole responsibility of the author and do not necessarily reflect those of this website or its editors.