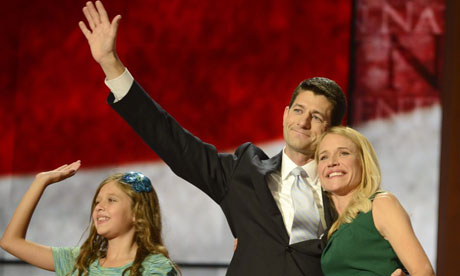 Wednesday night, the GOP's nominee for vice-president, Paul Ryan, delivered a speech loaded with pure, fundamental deceit on its core claims. The New Republic's Jonathan Cohn has the clearest and most concise explanation of those falsehoods.

Reflecting the pure worthlessness and chronic failure of CNN, however, here is how that network's lead anchor, Wolf Blitzer, reacted after the speech was finished:

"So there he is, the Republican vice-presidential nominee and his beautiful family there. His mom is up there. This is exactly what this crowd of Republicans here, certainly Republicans all across the country, were hoping for. He delivered a powerful speech, Erin, a powerful speech. Although I marked seven or eight points, I'm sure the fact-checkers will have some opportunities to dispute if they want to go forward; I'm sure they will. As far as Mitt Romney's campaign is concerned, Paul Ryan on this night delivered."

Blitzer's co-anchor, Erin Burnett -- who, the night before, described how she "had a tear in [her] eye" as she listened to Ann Romney's convention speech -- added this journalistic wisdom:

"That's right. Certainly so. We were jotting down points. There will be issues with some of the facts. But it motivated people. He's a man who says I care deeply about every single word. I want to do a good job. And he delivered on that. Precise, clear, and passionate."

"'A powerful speech' with only 'seven or eight' facts to dispute? Sounds like a winner ... [I]n the end, isn't 'precise, clear, and passionate' more important than truthful?"

As perfect an exhibit as that is of the empty, rotted wasteland known as "CNN," when it comes to conveying the self-parodying inanity of The Most Trusted Name in News, nothing will ever top this tweet, from Blitzer last week:

Related Topic(s): 2012 Elections; CNN; Democratic; Election Coverage; Elections And Campaigns; Issues; Republican, Add Tags
Add to My Group(s)
Go To Commenting
The views expressed herein are the sole responsibility of the author and do not necessarily reflect those of this website or its editors.