Statement #3, read by an Egypt military spokesman, indicates there is little reason to fear that the military is going to take control of Egypt in this moment and try to suppress the demands and aspirations of Egyptians.

The spokesman announced, "The army is not an alternative to the authority that is demanded by the people of Egypt." He explained the Supreme Council will soon hand down resolutions and statements laying out what will happen to the government in a post-Mubarak Egypt.

The New York Times's Lede blog has posted this report from Ahram Online, the English-language arm of the state newspaper Al Ahram, that "both of last night's addresses by Mubarak and Suleiman were in defiance of the armed forces":

Maj. Gen. Safwat El-Zayat, a former senior official of Egypt's General Intelligence and member of the Egyptian Council of Foreign Affairs, asserted, in an interview with Ahram Online, that the address delivered by President Mubarak last night was formulated against the wishes of the armed forces, and away from their oversight. He claimed that Vice Preisdent Omar Suleiman's address, which came on the heels of Mubarak's address, was equally in defiance of the armed forces and away from its oversight.

Also, a Muslim Brotherhood leader appeared on Al Jazeera and indicated he believes the army genuinely wants Egypt to become a democratic country. And he encouraged people to continue struggle to build democracy in Egypt. 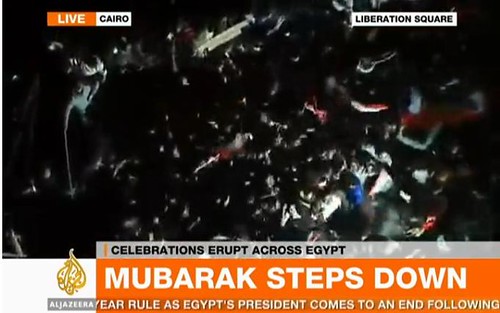 Here is the post that appeared before the Egypt revolution won victory. It illuminates the Egypt military and may provide some insight on what happens next.

Demonstrators in various cities in Egypt filled the streets for an eighteenth day. Many of the demonstrators on Friday, one day after President Hosni Mubarak and Vice President Omar Suleiman gave speeches indicating Mubarak was not resigning, have focused their attention on the military hoping that it will support their demands and aspirations.

High-ranking military officials have been trying to assure Egyptians that the changes and reforms being proposed will take place and they can go home. They are issuing military statements aimed at stabilizing Egypt. Colonels, according to Al Jazeera, are reportedly getting into conversations with demonstrators on the role of the military, whether the military will intervene to remove Mubarak, and higher officials thus far are maintaining that Mubarak should be able to leave with "dignity."

The actions of the military, presumably under the leadership of General Defense Minister Field Marshal Mohamed Tantawi, are not that surprising if one reads a cable sent in March of 2008 on Tantawi.

07CAIRO3503, indicates the military would not do such a thing:

" The military's loss of some prestige is partly due to the disappearance of an imminent, external military threat following the 1979 Camp David Accords. The regime, aware of the critical role the MOD [Ministry of Defense] can play in presidential succession, may well be trying to co-opt the military through patronage into accepting Gamal's path to the presidency. We agree with the analysis that senior military officers would support Gamal if Mubarak resigned and installed him in the presidency, as it is difficult to imagine opposition from these officers who depend on the president and defense minister for their jobs and material perks. In a messier succession scenario, however, it becomes more difficult to predict the military's actions. While mid-level officers do not necessarily share their superiors' fealty to the regime, the military's built-in firewalls and communication breaks make it unlikely that these officers could independently install a new leader.

A post-Mubarak coup had generally not been discussed between leaders and the US Embassy. That does not mean that the military had never thought about a scenario where the military might be forced to respond to maintain stability.

US officials and political opposition, as 10CAIRO145 indicates, thought in 2010 that prospects for significant political reform were slim while President Mubarak remained in office.

Protests have expanded and now are in and around Egyptian State TV, Parliament, presidential palace and other areas. Forces are trying to protect the presidential palace, but the military cannot contain the overwhelming power of the people. And, the protesters do not expect leaders like Tantawi to do what's right because he is part of the Mubarak regime.

Kevin Gosztola is managing editor of Shadowproof Press. He also produces and co-hosts the weekly podcast, "Unauthorized Disclosure." He was an editor for OpEdNews.com
Related Topic(s): Demonstrations; Egypt; Egypt; Egyptian Revolution; Military; Revolution; Wikileaks; Wikileaks, Add Tags
Add to My Group(s)
Go To Commenting
The views expressed herein are the sole responsibility of the author and do not necessarily reflect those of this website or its editors.