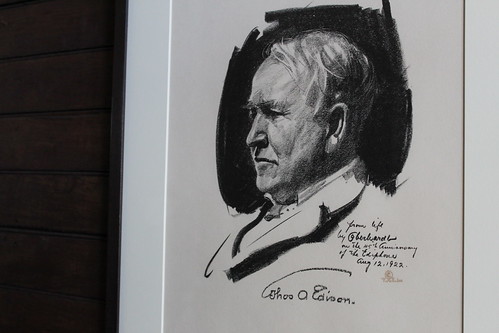 America's supreme inventor - creator of the electric light, the phonograph, the movie projector, the carbon telephone transmitter and a thousand other devices - was also a whimsical skeptic who laughed at supernatural beliefs.

Edison, "the wizard of Menlo Park," was a revered American celebrity in the early years of the twentieth century. But he stirred national wrath in 1910 by giving blunt answers in news interviews.

In one, a reporter asked: ''What does God mean to you?" Edison replied: "Not a damn thing." The hypothesis of an invisible deity is merely "an abstraction," he said, adding that "billions of prayers" had been uttered with no discernible effect on disasters or wars.

In another interview, Edison stated: "So far as religion of the day is concerned, it is a damned fake.... Religion is all bunk.... All bibles are man-made."

A full-page article in The New York Times said of Edison: "A merciful and loving Creator he considers not to be believed in. Nature, the supreme power, he recognizes and respects, but does not worship."

The news reports caused a storm: Angry ministers protested from their pulpits. Thousands of irate letters arrived at Edison's New Jersey laboratory. A Catholic cardinal wrote in Columbian Magazine that Edison's views on profound questions carried no weight because he was, after all, "a mere mechanic." Edison's business investors begged him not to taint Edison Industries by further blasphemy.

Edison tried to explain away his earlier statements by saying he believed in "a supreme intelligence." But the controversy lingered for years.

Occasionally, the inventor played games with his detractors. In 1920, he announced that he was working on an electronic device to communicate with departed souls: "It will give them a better opportunity to express themselves than Ouija boards or tilting tables."

When a minister inquired about installing lightning rods on his church spire, Edison replied: "By all means, as Providence is apt to be absent-minded."

Edison had been an agnostic since boyhood, and he was unorthodox in other ways. He attended school only three months in his entire life. Teachers labeled Edi­ son retarded, but his mother knew better and taught him at home, where his keen mind flowered. By age twelve, he had read Gibbon's The Decline and Fall of the Roman Empire, Burton's Anatomy of Melancholy, and other classics. He read Paine's famed attack on Christianity, The Age of Reason, and later recounted: "I can still remember the flash of enlightenment that shone from his pages." According to biographer Matthew Josephson, "the skeptical writings of Darwin, Huxley and Tyndall were the favorite reading of Edison's youth." Biographer Wyn Wachhorst states, "Edison rejected three fundamental tenets of Christianity: the divinity of Christ, a personal God, and immortality."

Science became Edison's obsession. Even while working as a newsboy on a passenger train, he conducted experiments in a private comer. At age twenty-one, he repaired a broken telegraph ticker in a New York gold market office and landed a job as an electrical technician. Later, he struck out on his own, creating the world's first industrial research laboratory. Success followed upon success. Fame and wealth came to him. Nor did growing deafness deter him.

After his first wife died, Edison courted Mina Miller, a devout Methodist, with whom he clashed over religion. In 1898, when President McKinley publicly thanked God for victory in the Spanish-American War, Edison wrote to her: "But the same God gave us yellow fever, and to be consistent McKinley ought to have thanked him for that also."

After they were married, Mina invited clergymen to dinner, to pressure her agnostic husband. Once she entertained six Methodist bishops, triggering a ferocious theological debate that ended when Edison said, "I'm not going to listen to any more of this nonsense!" and stormed out.

Afterward, the Edisons agreed not to discuss religion, and so lived happily until his death at age eighty-four.

Related Topic(s): ATHEIST; God; Intelligence; Nature; Religion; SOUL; Success, Add Tags
Add to My Group(s)
Go To Commenting
The views expressed herein are the sole responsibility of the author and do not necessarily reflect those of this website or its editors.