Employment rates for prime-age workers (ages 25 to 54) hit a new high for the recovery.

The job growth for October was depressed by the United Auto Workers strike at General Motors. This reduced manufacturing employment by more than 40,000. This drop will be reversed in November, but it pushed manufacturing employment's share of total employment down to 8.4 percent, the lowest on record. In looking at the October job growth data, it is also important to note sharp upward revisions to the prior two months' data, bringing the three-month average to 176,000. 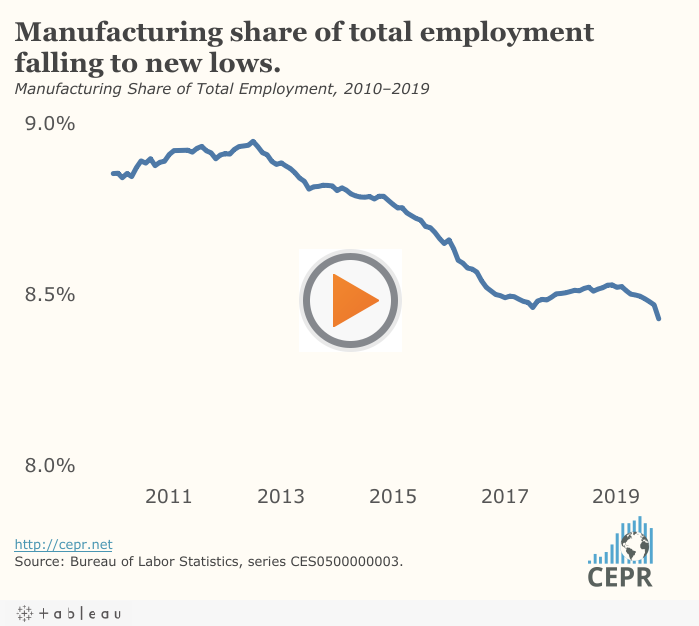 There was an extraordinary jump of 47,500 jobs in restaurants in October, which accounted for 37.1 percent of job growth for the month. With upward revisions to job growth in this sector for the prior two months, the three-month average has been 38,000. This is surprising given the low overall unemployment rate. Restaurants jobs tend to be low-paying, with few benefits, and for this reason, they often go unfilled in a tight labor market.

There was also some slowing in the high-paying professional and technical services sector. It added 16,500 jobs in October, compared to an average of 22,600 over the last year. Trucking added 1,300 jobs last month, but it is still down 7,300 jobs from its June peak. The retail sector added 6,100 jobs, its second consecutive month of growth, but employment is still down by 22,100 (0.1 percent) from its year-ago level.

The percentage of unemployment due to voluntary quits edged down to 14.5 percent but is still near the high for the recovery. There was little change in the duration measures of unemployment.

The number of people working part-time for economic reasons rose by 88,000 but is still almost 200,000 below its year-ago level. The number of people voluntarily working part-time edged down by 24,000. This figure has lagged in the last year, with the average for 2019 just 0.4 percent higher than for 2018, meaning that it is dropping as a share of total employment. This is consistent with a situation where it is more difficult to get health care insurance outside of employment.

On the whole, this is clearly a positive report. The economy is adding jobs at a healthy pace. There are signs of weakness in key sectors such as construction and manufacturing (even when pulling out the effect of the GM strike). Also, wage growth is surprisingly weak given the low unemployment rate, but there is no sign of a recession anywhere in sight.

Dr. Dean Baker is a macroeconomist and Co-Director of the Center for Economic and Policy Research in Washington, D.C. He previously worked as a senior economist at the Economic Policy Institute and an assistant professor at Bucknell University. (more...)
Related Topic(s): Economy; Education; Jobs; Unemployment; Workers, Add Tags
Add to My Group(s)
Go To Commenting
The views expressed herein are the sole responsibility of the author and do not necessarily reflect those of this website or its editors.