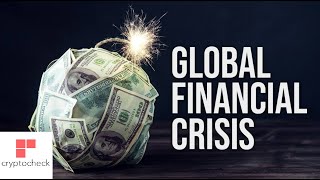 Coronavirus and globalism will teach us vital lessons. The question is whether we can learn vital lessons that do not serve the ruling interest groups and ideologies.

Coronavirus will teach us that a country without free national health care is severely handicapped. Millions of Americans live paycheck to paycheck. They cannot afford health care premiums, deductions, and copays. Millions have no insurance. This means millions of people infected with coronavirus who cannot get medical help. The morbidity from this is intolerable in any society.

Shutdowns associated with efforts to contain the spread of coronavirus will deny income to millions of Americans who live paycheck to paycheck. What do they do for food, shelter, transportation? You don't have to think very long along these lines to see a very frightening scenario.

Globalism has taken down the ladders of upward mobility by exporting American middle class jobs to Asia. A population once able to save now lives on debt, the service of which is interrupted by recession/depression and by debt service absorbing all net disposable income.

Globalism has also reduced the survivability of our society by making it dependent on externally produced goods, the supply of which can be cut off by disruptions in other societies, by policy disagreements leading to sanctions, and by an inability to export enough to pay for imports, which is what the off-shored production of US firms is.

The United States has an unprotected population and an economy in trouble. For years corporate executives have run the companies for the benefit of their bonuses, which are largely dependent on rises in their company's share price. Consequently, profits and borrowings have been invested in buying back the companies' shares and not in new investment in the businesses. Corporate indebtedness is extreme and will threaten many corporations and many jobs in a downturn. Boeing is a case in point.

Economist Michael Hudson has for many decades studied the use of debt-forgiveness to restart economies killed by debt burdens. Debt forgiveness for corporations has a different implication than debt forgiveness for individuals. For corporations, forgiving debts lets those who financialized and indebted the economy and the population off the hook. To avoid rewarding them for the catastrophe they produced and to prevent widespread public outcry and distrust, nationalization is implied for insolvent companies and banks.

Nationalization would be limited to insolvent companies and financial institutions and doesn't mean that there would be no private companies or businesses. Additional nationalization could be used to prevent strategic companies from substituting their interests for national interests, which they do when they move American jobs and factories offshore. Pharmaceuticals could be nationalized along with health care. Energy which often sacrifices the environment to its profits could be considered for nationalization. A successful society has to have more driving it than private profit.

For most Americans nationalization is a dirty word, but it has many benefits. For example, a national health care system reduces costs tremendously by taking profits out of the system. Additionally, nationalized pharmaceutical companies could be made more focused on research and cures than on profit avenues. Everyone knows how Big Pharma influences medical schools and medical practice in line with Big Pharma's approach. A more open-minded approach to medicine would be beneficial.

Socialist is another American dirty word, one that is being used against Bernie Sanders. I have not turned into a socialist overnight. I am simply thinking out-loud. How can the economy recover when the population and corporations are smothered by debt? Debt forgiveness is the only way out of this debt suffocation. Can debts be forgiven without nationalization? Not without a huge giveaway to financial mangers and Wall Street. It is the members of the "one percent" who have received 95% of the increase in us income and wealth since 2008. Do we want to reward them for smothering the economy with debt by bailing them out without nationalizing them?

The combination of an economy covered in debt and an unprotected population is clearly revolutionary. Do we have leadership capable of breaking out of interest group politics and ruling ideologies in order to save our society and put it on a more sustainable basis?

Or will the economic hardships be blamed on the virus, the catalyst that ignited the debt time-bomb?

Related Topic(s): Corona Virus Coronavirus Covid-19; Corporations; Economic Crisis; Globalism; Insurance; Jobs, Add Tags
Add to My Group(s)
Go To Commenting
The views expressed herein are the sole responsibility of the author and do not necessarily reflect those of this website or its editors.