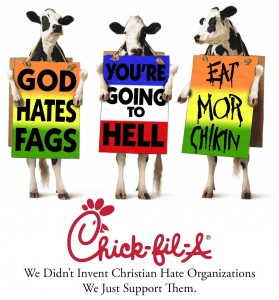 jesus chicken
(Image by Unknown Owner)   Details   DMCA
Sarah Palin has weighed in on the Jesus Chicken controversy, affixing the official Teabagger "crazy" seal on the feeding frenzy that has captivated the corporate media and kept us safely distracted from other, more important news, like Mitten's failure to pay taxes for a decade.

Or a couple of bloody, foreign wars against another hated group -- the Muslims.  But I digress.

"... boycotting Chick-fil-A has a chilling effect on our First Amendment rights" Sarah screeched to Greta Von Sustrun on (what else) Fox "News" Tuesday night, adding that the fast food chain is "being harmed by those who are intolerant and are bigoted and are hypocritical."

Caribou Barbie brands those who favor tolerance (isn't that a TRUE Christian value?) and civil liberties as hypocritical violators of our Constitutional freedoms. Yeah, that's about right. Fits in perfectly with the Ubur-right's Orwellian doublethink tenants: Freedom is Slavery, Ignorance is Strength, and War is Peace.
Sarah and "First Dude" Todd (soon to be a reality TV star in a show that turns warfare into entertainment -- with REAL bullets!) partook of the breaded nugget communion in solidarity with the other right-wing-nuts who lined up in record numbers to stuff their gizzards with artery-clogging hydrogenated battered bits of hormone-laden corporate poultry in a demonstration of their holy union with CFA founder Dan Cathy's recent statements in a radio interview opposing gay marriage:

"I think we are inviting God's judgment on our nation when we shake our fist at Him and say, 'We know better than you as to what constitutes a marriage.' I pray God's mercy on our generation that has such a prideful, arrogant attitude to think that we have the audacity to define what marriage is about."

The Supreme Deity, it seems, is preoccupied with the naughty bits of us lowly mortals, and how some of us choose to employ them. Given this, you would think He would do something about the culture of pedophilic Catholic Priests who continue to molest young children in the protected guise of trusted community spiritual leaders?
No?
Why in all that's deep-fried does a fast-food chain even have an opinion on socio-political issues like gay marriage is a question worth asking. What's next? Will Wendy get her perky red braids in a twist over birth control? Ronald McDonald flip his flaming wig over legalizing medical marijuana?
One thing's for certain -- bigotry is good for Big Business, it appears. The Rapture Right donned their stretch pants and flooded their favorite flying-monkey fried fast fooderies to loft their nuggets heaven'ward in solidarity with homophobes and haters across the fruited plane and gobbled greasy globs of processed factory farmed psuedo-poultry in pious protest of civil rights.
Greg Palast was right, we're living in an armed madhouse.

Kathy never expected a career in radio as a talk show producer. Born and raised in Atlanta, Georgia, Kathy was completing her nursing degree when in 2001 - in an emergency - she was asked to fill in as the producer of Mike's program. Within a few (more...)
Related Topic(s): Bigotry; Chick-fil-a, Add Tags
Add to My Group(s)
Go To Commenting
The views expressed herein are the sole responsibility of the author and do not necessarily reflect those of this website or its editors.