CO2 is plant food. I know this is true, because smart Republicans like Reps. Dan Shimkus and Michele Bachmann said so. In fact, the "CO2 is plant food" meme can bring up 48,000 hits on Google.

So rising CO2 should be good for plants, right? Because a conservative argument with a patina of science just can't be wrong.

Earth's plant life is being killed by the heat.

This week's edition of the journal Sciencecontains a paper by Maosheng Zhao and Steven W. Running concerning the reaction of land plants to climate change. Zhao and Running have been measuring terrestrial net primary production (NPP), which is a measure of how much carbon land plants take in and store as part of their structures. While earlier measures looked good (NPP rose in the '90s), over the past decade the picture is grim: as CO2 has been rising, NPP has been falling in lockstep. Plants are not keeping up with human CO2 production. Which means that the ability of land plants to act as a carbon sink in actually weakening as time goes on.

NPP is tricky to measure though it takes a complex model with a lot of inputs. But there is another way to measure the growth (or decline) of land plants, and that is by satellite measurement. NOAA's annual State of the Climate report is a must-read for anyone interested in the guts of climate science today.

One of the most depressing facts in this report is an indicator called the Fraction of Absorbed Photosynthetically Active Radiation, or FAPAR. Photosynthesis uses only very narrow parts of the spectrum, so you can look down at the earth and see how much of those frequencies are being absorbed on the Earth. Essentially, FAPAR is a measure of how much photosynthesis is going on -- or how much plants are growing. From space, FAPAR can be measured over land areas quite easily, and has been measured since 1998. And the picture isn't good. 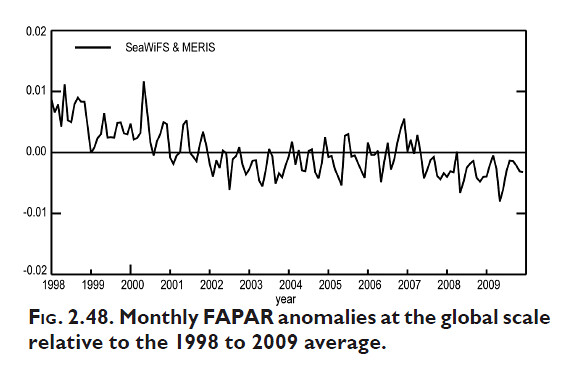 We've lost about 1.5% of global land-plant growth over the past 12 years. Interestingly, this loss is concentrated in the southern hemisphere, as seen in this graphic:

Three weeks ago in Nature, the world's oldest scientific journal (and one of the most respected), Daniel G. Boyce, Marlon R. Lewis & Boris Worm report on a study they undertook to determine global phytoplankton concentration over the 20th century.

(Image by Unknown Owner)   Details   DMCA
Phytoplankton are tiny single-celled marine plants that form the base of the ocean's food chain. Everything that swims in the sea depends on phytoplankton either directly or indirectly as a food source. More important, phytoplankton are responsible for about half of the photosynthesis (read: oxygen) on earth.

But phytoplankton are difficult to study, because the level of phyoplankton in the sea varies radically, by several orders of magnitude (that's by thousands of times), and those variations are seasonal, and regional, and there's a bunch of random noise too. So you need a lot of data over a long time period to make sense of what's going on in the long term. And Boyce et. al. have finally got the data.