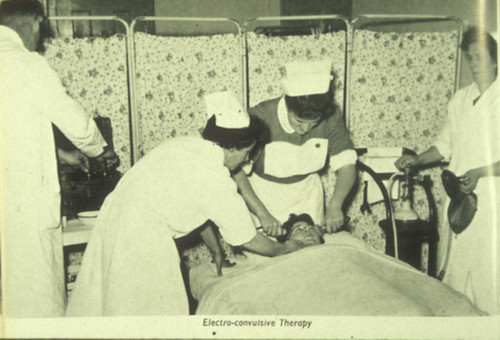 The Mad Hatter raised a sagging wrist. "No worries, they would never have let you in until they had me properly medicated." He pointed to a couple of folding chairs next to his bed. "Sittez-vous."

Alice leaned over and stroked the Hatter's forehead. "You're burning up."

"Literally," said the Hatter. "I just couldn't take it any more." A sigh. "They said I was 'mad as hell' and stuffed me in this place." He nodded at the bars on the windows. "Can't have delusional fictional characters running around free, you know."

"Delusional?" The Rabbit's whiskered jaw dropped. "Why you're the only one who sees things clearly as they are?"

"Exactly," sighed the Hatter. "I hereby renounce my previous observations and now adopt the party line. No more explaining that 99% of the world's population want world peace, thriving local communities, safe homes, life-affirming health care, broad and wise education, good jobs with comfortable retirements and pensions years before death, et cetera, et cetera. I will now shout from the rooftops that terrorists are in our midst, endangering us and our loved ones at every corner so that we must give up our privacy and our rights, and sacrifice our serfish (sic) lives for the endless Machiavellian battles that ensure the war, oil, and corporate industries and the .001% continue to gain obscene profits from their investments." He pointed at a pen and paper on the side table. "Here, I'll sign the confession to that effect. It's all the Muslims' fault. War is Peace. Privatize the Profits and Socialize the Losses."

"Me?" the Hatter cried. "You--if you think that I'm not going to support the mainstream line that crazy Muslim jihadists are truly attacking civilians in the US and all over Europe, that nasty Syrian rebels have turned against the US, that a Turkish coup attempt was only an excuse for a tin-pot dictator's purge, that Iran is suicidal, and that Russia is just waiting for the opportunity to be annihilated by NATO nuclear weapons. Bad Muslims. Bad Russians."

The Hatter looked startled. "Did she really say that?" He brushed away a tear. "Ah, my dear, only a crazy character would believe that we are treading closer to the abyss of global warfare in Europe, the Middle East, and Southeast and East Asia. That events are being exacerbated and manipulated to create fear and hatred among peace-loving peoples, so as to promote the support of military actions in multiple arenas. That the vision is to maintain the hegemony of a Western Axis with Middle Eastern satellites and agents, to steal and control natural financial resources from conquered feudal serfs and to break up functioning alliances and countries into stone age pieces and neutralize and manipulate international competition and control. If I were an American, I would be ashamed to acknowledge such a strategy."

"But you're English," Alice countered. "I think we all are, aren't we?"

"Great point, Sister," the Rabbit said. "Maybe then we can all Brexit from this insanity and find a place where we can create a peaceful country with a balanced and supportive social democracy like Chavez tried to build in Venezuela."

"And that's going really well, Rabbit," snorted the Hatter. "Of course, the Western Axis would never get involved in Venezuela," the Hatter scoffed. "No, maybe we could ride out the next decade in Costa Rica, if we pretend to be Republicans. There's always the secret installation under the Denver Airport. Or we can go to Antarctica or the Arctic Circle. I hear Greenland is very cold this time of year."

"Count me in, Hatter. An igloo's almost like a rabbit hole. And the snow can absorb any unwanted nuclear radiation, so--"

"Don't move!" Three orderlies and a nurse burst into the room holding a straitjacket. "Cuff the Lagomorph," the nurse shouted, "And give him a half milligram of Haldol IM STAT!"

"What about the girl?" asked one.

Related Topic(s): Insanity; Insanity; Peace; Peace, Add Tags
Add to My Group(s)
Go To Commenting
The views expressed herein are the sole responsibility of the author and do not necessarily reflect those of this website or its editors.