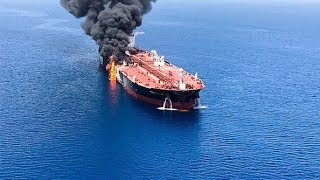 Oil under pressure after Gulf of Oman attacks on two oil tankers Cresset Capital Chief Investment Officer Jack Ablin beaks down the oil market and what the attacks on oil tankers in the the Gulf of Oman means for oil prices ...
(Image by YouTube, Channel: Yahoo Finance)   Details   DMCA

Oil tanker on fire after alleged attack in Gulf of Oman

Early this morning two oil tankers in the Gulf of Oman, according to various uncorroborated accounts, were involved in some sort of attacks causing explosions, damage to hulls, plumes of smoke in the air, on fire and adrift, mariners rescued, supposedly even one vessel sunk.

All this comes a month after four ships were reported damaged off the coast of the UAE, which the Pentagon almost immediately accused Iran of precipitating then two weeks later Trump's national security adviser John Bolton while "conveniently" visiting the capital Abu Dhabi and talking to reporters said of these incidents, the attacks were from mines "almost certainly" from Iran. Who else would you think would be doing it? Someone from Nepal." To date no evidence has been found, only unproven allegations.

Well we haven't heard from Bolton as yet on these latest incidents but with his obsession of wanting to attack Iran and bring about regime change-which he's spoken about on numerous occasions in the past-it would come as shock if he didn't accuse Iran for perpetrating these incidents.

To those who want evidence before concluding who was behind the latest attacks-of course not including Bolton or the coterie of other psychopaths ruminating in the White House or their environs as in Secretary of State Mike Pompeo, Vice President Mike Pence or even the "Donald" himself where accusations, assertions, allegations are all that's needed to blame Iran-it seems the bar for attacking Iran is getting lower. The Abraham Lincoln aircraft carrier in the Persian Gulf and B-52's flying overhead are clearly provocations against Iran thus upping the ante to get the Islamic Republic to commit some overt act to justify some "retaliatory" attack by US forces or their allies in the region notably Saudi Arabia and/or Israel.

Considering actual evidence of the US perpetrating false flag operations in the past-think the 1965 Gulf of Tonkin incident blaming North Vietnam for precipitating an attack on US Naval forces then President Lyndon Johnson asking for and getting the Congress to justify escalating the war in Vietnam with the "Gulf of Tonkin Resolution" or later 9/11 justifying "Dubya" Bush's global war on terrorism then attack Afghanistan in October 2001 going after Osama bin laden to Secretary of State Colin Powell's phony video presentation before the UN in February 2003 allegedly revealing Iraq's Saddam Hussein's WMD chemical weapons facilities and "Dubya" invading Iraq in March 2003-they've become the allegations for the US to attack against the "enemy" of choice at the time.

So it would not be a surprise "accusations" against Iran for perpetrating an "alleged" attack on US or allied interests in the region would be the basis for a US retaliation against the Islamic Republic.

Iran in particular knows they are in the cross-hairs of potential US aggression against it but is unlikely to retaliate unless it is directly attacked.

Of late chemical inspectors investigating the evidence of an alleged gas attack in Douma, Syria last year was likely from canisters placed there after the alleged attack in areas controlled at the time by anti-government insurgents and not from an aerial attack by Syrian President Bashar Assad's armed forces-all of which repudiates the allegations made by Trump causing him to retaliate and send ballistic missiles targeting the Assad government military facilities.

The recklessness of US retaliatory attacks against some accused "enemy" based on allegations that are later proved false are not lost on the rest of the world-including US allies in Europe who have gone along with the US bombing charade but so far too feckless to confront the US bully.

That could change with Trump threatening secondary sanctions against countries in Europe that signed the 2015 nuclear deal with Iran, want trade with Iran to continue despite Trump pulling out of the deal in 2017. Meanwhile business interests in Europe-including Britain-want their governments to uphold the Iran nuclear deal.

They also know a US attack on Iran would be a catastrophe.

There's an unpredictability to this administration that's scary making the 1962 Cuban missile crisis and confrontation between the US and Soviet Union seem tame in comparison. At least President Kennedy and Soviet Premier Nikita Khruschev were talking with each other and resolved the crisis peaceably.

We have no direct contact with Iran with the antagonists armed to the teeth facing each other in the Persian Gulf off the Strait of Hormuz and the coast of Iran-to say nothing of the rabid Bolton wanting mayhem to rain down on Iran.

Retired. The author of "DECEIT AND EXCESS IN AMERICA, HOW THE MONEYED INTERESTS HAVE STOLEN AMERICA AND HOW WE CAN GET IT BACK", Authorhouse, 2009
Related Topic(s): Oil Tankers Attacked In Gulf Of Oman, Add Tags
Add to My Group(s)
Go To Commenting
The views expressed herein are the sole responsibility of the author and do not necessarily reflect those of this website or its editors.