ENABLING ACTS
FOR AN ERA OF GREED 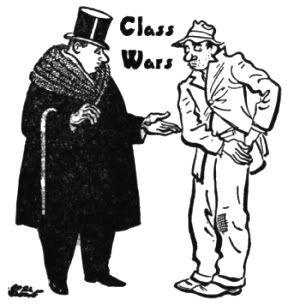 The Money Party at Work

Huge majorities in both houses of Congress voted for legislation to allow the biggest bank heist of all time.   But this time, it was the banks pulling the heist.

Our financial system looks ruined beyond repair.  The credit default swaps crisis is 40 or so times bigger than the real estate meltdown over subprime derivatives.  The top 25 banks in the United States are loaded down with $13 trillion in credit default swaps and the deal is coming unraveled.  If we accept the highly dubious assumption that the debt from the financial meltdown needs to be repaid by us, were looking at $43,000 a citizen right now.  And we're just starting.

It didn't get that way by accident.  There was special legislation that enabled the current crisis.

This was classic Money Party strategy and tactics.

The strategic goal was to turn Wall Street into a big casino for the "in crowd" of major investors, funds, and institutions.  No rules and no regulations: "let the market take care of it" was the philosophy.

The tactics were easy.  First you set up a scholarly group called the Law and Economics movement to give your scheme legitimacy.  Then you give money and other favors to members of Congress.

At the right moment, you call in your congressional markers to let the banks start doing what they did to spark the Great Depression.  Walk into the Wall Street casino loaded with cash and spend like they're on coke.  Your corny academic group has a couple of judges who decide a case that gives legal grace to the scheme.  The casino is legit says the court.  You then go for the whole nine yards by bringing back the long outlawed derivatives, subprimes, credit default swaps, etc.

The corporate media either ignores your "long con" altogether or covers it on their back pages.

Done deal!  It's the perfect storm to create economic chaos allowing the most massive transfer of wealth since the Visigoths sacked Rome in 410 CE.  It's all about socialism for the rich and survival of the fittest for the rest of us.

But Congress and the Treasury Department will preserve the financial elite in perpetuity.  Why?  To begin with, they'd have to admit that they created the problem in the first place with their enabling legislation.  Congress would also have to admit to absolutely zero oversight on this matter despite warnings.

Three distinct events enabled the current economic chaos.  The baseline requirement for the era of greed was satisfied in 1999 when Congress repealed key provisions of the Glass-Steagall act. That law was established during the first Great Depression. It tightly restricted the opportunities for reckless speculation by banks..  They were barred from selling stocks and other speculative schemes.  Title 1 of Financial Services Modernization Act, 1999 says it all:

Related Topic(s): Bailout; Bailout Profiteers; Banks; Credit; Default; Derivatives; Investors; Meltdown; Wall Street, Add Tags
Add to My Group(s)
Go To Commenting
The views expressed herein are the sole responsibility of the author and do not necessarily reflect those of this website or its editors.