An editorial installation by Patrice Greanville
Dedicated to Cindy Sheehan, in appreciation of her brave and desperately needed work. 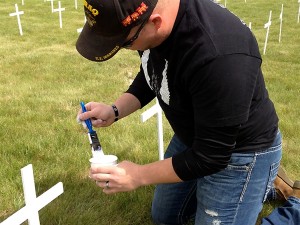 The mawkish, strident adulation for fallen American soldiers--mostly sons and daughters of the underclass--reaches a crescendo during perverted "holidays' like memorial Day, as  the propaganda mills of the Empire work double time to reinforce the prevailing chauvinist myths that imprison the American consciousness from cradle to grave. It's all part of the cynical propaganda playbook used by the elites to keep the "great unwashed" doing their bidding.  I say cynical because the upper tiers, while seeming to partake of the reverence,  cold-bloodedly manipulate people's most fundamental emotions to serve their ends: thus bonds of love and gratitude for the fallen; the deeply ingrained, tribal love and respect of country; and hatred and fear toward "the other"-- our designated enemies du jour--all are marshaled to keep the population well within the approved catechism.

While trying to inject some sanity into this self-congratulatory orgy, many antiwar activists are often surprised if not shocked by the fierceness with which some wounded vets (and their kin) defend the goodness of their mission. They should not be. It is a huge tragedy, alright. And it's perfectly human. For what could be more tragic than giving up your life or your health in the service of a criminal enterprise? After all people who have invested so much, who lost precious limbs or their sight, who suffered grotesque disfigurements, who witnessed the death of close comrades, are not the kind of audience to welcome with open arms someone telling them they went through all that hell for nothing, and, that, to top it all off, they were not only terribly unlucky but played for suckers.  It's a classical case of cursing the messenger, of finding the Matrix a lot more comforting to live with than the truth.

Separate the person from the mission

Hard as it is, the work of public education about our wars must continue.  For propaganda --and often poverty and immaturity--killed these men, each and everyone of them--whether they fell in Korea, Vietnam, Iraq or Afghanistan, or in any other of the scores of outposts where the imperial elites have decided to meddle. These people never quite understood what they were doing (most still don't) but their actions--some ugly enough to leave them with psychic scars for life, which is undoubtedly a testament to their decency-- in no way enlarged or strengthened America's freedoms or security. They merely created more sworn enemies for the United States.
_____________________

EXCERPT FROM COMING HOME (1978),  directed by Hal Ashby.  In this concluding scene, paraplegic vet Luke Martin (Jon Voight, who that year won best actor award for this role), addresses an audience of high school kids to warn them about the risk of falling for the war propaganda being dished out by a Marine recruiter. This powerful scene is intercut with the suicide of Capt. Bob Hyde (Bruce Dern, also in a memorable role) a man who returns home totally broken inside, and the life sustaining chores of the women (Jane Fonda and a friend), all wrapped up in a magnificent musical score. Coming Home is one of the best antiwar films ever made. Too bad that Voight has since veered sharply to the right and is now an outspoken idiot for Republicans.  Apparently, like many actors, he learned little from the noblest part he ever played.

Of course, as explained earlier, attacking the carefully seeded propaganda minefield is tough in America; the truth goes against the grain of what most people have been indoctrinated to believe and hold dear in our country.  After all, the best propaganda is usually grounded in half-truths, with the "true" part making the lie easier to swallow. In this case, if you observe the example I use below (courtesy of NBC)--a routine exercise, mind you, for our Big Media controllers--the words and deeds of "patriotic Americans" ring true because they are true. Most propaganda disseminated in the US is for consumption by the "hinterland", the social and cultural "backwaters" of the nation, the people who innocently eat cliches for breakfast, lunch and dinner; who never quite shed the "Leave It To Beaver" mindset; who furnish disproportionately the bodies in uniform who kill and get killed; and who vote regularly against their own interest...not by the smart kids at Yale, Harvard and other bastions of privilege who will later move on to hedge funds or other cushy spots in the social pyramid.  These people are not faking their emotions, but having genuine feelings of sadness and gratitude, a huge sense of loss for those who went and never came back, or came back unplugged. That's the entire reality they see, and their reaction is understandable.

Unfortunately, being genuinely sad, angry or joyful about something does not preclude being at the same time manipulated and completely wrong about it, and that's where the catch-22 is. These people are following a script, a faux reality implanted in them, and transmitted via all cultural channels, all pulpits, many decades ago, way before they were born. Fact is, how many of our soldiers would have enthusiastically put on the uniform to fight "for truth and freedom", the American Way, etc., if they had known it was all a cruel hoax? That the glorious crusades in places they had never heard of before would be about further enriching a puny, filthy rich sociopathic minority or helping a bunch of multinationals and their system maintain  control over the world? That they would be seen --correctly--as oppressors and not as liberators? Not many takers I think, except for the war lovers and the mercenaries in our midst, but that's another story. Some people are simply born stupid or indecent, and there's no sending them back.

Yet the power of propaganda, the power of mass psychosis and conformity to coerce behavior is immense, especially when the truth about the social reality has been decisively stamped out.  What's more, people fighting for the "wrong cause" can be awfully heroic, too, and, at the retail level, quite nice, which confuses matters even further.  How many Southerners died in the Civil War defending what they thought was a noble cause instead of the obscene way of life of an oppressing plantocracy? And what about the Nazis? Germany's armies in WW2 had millions who fought bravely for what they saw as the righteous cause of the "Vaterland".  Or--the supreme irony--something that would improve on capitalism! They were horridly wrong, but it took the industrial might of the greatest powers on earth, and the mobilization of massive armies across the globe to straighten them out. Chauvinist and narcissistic lies die hard, literally.

Next time you feel saddened and angered by all these coffins and broken bodies coming home, these endless wars, the scandalous dedication of badly needed social resources to destruction and greed, think about the fact that, in general, most wars are needless, futile and criminal enterprises, notably those which are wars of conquest. Against such a backdrop, a just peace is the greatest bargain, the most beautiful thing anyone could dream of.  And that is something really worth fighting for.

Patrice Greanville is The Greanville Post's founding editor.
OTHER FILMS YOU SHOULD WATCH ON MEMORIAL DAY
Born on the Fourth of July
All Quiet on the Western Front
Friendly Persuasion
The Battle of Algiers

EXHIBIT / Material reproduced under fair use clauses, as editorial comment. This kind of propaganda obfuscating and whitewashing the actual motives for our wars is routine operating procedure throughout the corporate media.


The beauty in the details: Idaho's 'Field of Heroes'

In Pocatello, Idaho, virtually the entire town has been involved in a special Memorial Day celebration. NBC's Mike Taibbi reports.


The following video was published as a Flash video, which are no longer allowed. Here is the video link: VIEW VIDEO (in a new browser window)

Media critic and former economist P. Greanville is The Greanville Post's founding editor (http://www.greanvillepost.com/). He also serves as publisher for Cyrano's Journal Today. He has a lifelong interest in the triumph of justice and (more...)
Related Topic(s): America; Antiwar; Democracy; Military; Morale; Peace; Propaganda; Soldiers; Truth, Add Tags
Add to My Group(s)
Go To Commenting
The views expressed herein are the sole responsibility of the author and do not necessarily reflect those of this website or its editors.