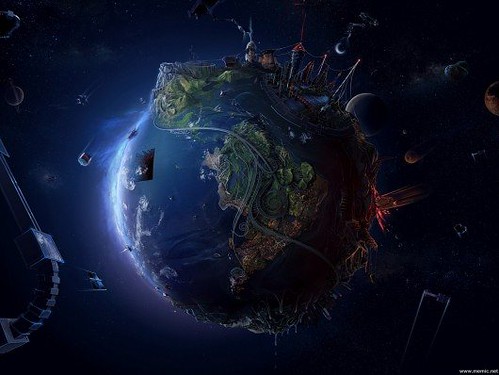 Quite a while ago, the New York Review of Books newsletter arrived at my Inbox, and in it was a blog piece called "Portable Hell," by my favorite poet, Charles Simic, who writes about the effects of our infernal current events and sums up my outlook succinctly with, "The world is going to hell in a hurry. At my age, I ought to be used to it, but I'm not." I don't why this Simicism came back to haunt me on -- of all days -- today.

Because no matter whether you were raised reading the People's History of the world or the Conqueror's, the distilled point of their synthesis drips bleak, bleak, bleak, like the slow water torture of historical consciousness applied ever-so-subtly to human memory.

When I was in my late teens, ever hung over from the frightful social turmoils of the late '60s and early '70s, like many young geeklings I escaped into literature, hoping to read my way out of impending disaster. I started out by reading the usual suspects Steinbeck (lovable stumble bums that helped me romanticize homelessness), Hemingway (impossible and unnatural grace under pressure), Roth (Portnoy and the human stain on his sheets) and Flannery O'Connor (Misfits with guns and self-flailing whips), but they quickly reminded me of the colossal wreck of Pax Americana (neo-liberal-con), and deepened my worries about the human condition. So I moved on to other lits -- European poetry and novels (Heine and Goethe), biographies of composers (Wagner, by Nietzsche, for instance), scientific works (Faraday's caginess), art and astrology (Madame Blavatsky), before finally tripping over C.S. Lewis Out of the Silent Planet (a guy named Ransom gets kidnapped: what a hoot!) and discovering with great astonishment the worlds of endless possibilities that speculative and science fiction posed. And here I am today (or am I?).

I read a lot of sci-fi; I liked imagining how new technologies and humanity could evolve together; or I simply mooned over the far future of our species, as you do with, say, Olaf Stapledon's Last and First Men. (Pssst, we begin our demise in that book about human evolution over the 10, 000, 000 years with a war with the Chinese. Are you done with that dumpling?) But most of all I was attracted to dystopic fiction from the start, maybe because the world seemed like such a disaster, while at the same time I was young and needed to understand what had gone wrong and envision how it could be fixed. And for whatever reason, the dystopia that captured my imagination then, and remains a favorite to this day, was George R. Stewart's Earth Abides.

I'm not sure what attracted me specifically to that book, although I suspect it was the title, which reminded me of Ernest Hemingway's The Sun Also Rises, and, in fact, both titles are derived from the same line in the Book of Ecclesiastes:

What profit hath a man of all his labor which he taketh under the sun? One generation passeth away, and another generation cometh: but the earth abideth for ever. The sun also ariseth, and the sun goeth down, and hasteth to his place where he arose.

In other words, as that great philosopher David Lee Roth would say, after all our gigoloing with Nature, "Life goes on without me."

Over the years the lines from the Bible have affected me more than any other from the Bible (I'm a bibliophile), as it so straightforwardly implies that humans are not the be-all, end-all of Creation, and that Being goes on without us. Considering the source, this deeply resonating chord struck me as subversive, and I'm sure influenced my later decision to major in philosophy at university. Although, you wouldn't know it from looking at me. I'm afraid to shave, I get so stupid when I think about the human plight, like Harry Haller.

Strictly speaking, Earth Abides is not simply dystopic but, more, post-apocalyptic. Often dystopias present systems turned into nightmares but still functioning on some level. But with post-apocalyptic lit, all systems are down, and even the assumptions left over in the heads of survivors are smoky rhetorical question marks. Human certainty ceases, although the sun continues to rise and set regardless. Ho-hum, boo-f*cking-hoo, says Nature.

I've tinkered with dystopic fictional ideas, too. I'm sure, in my mind, that I was one of the first to invent a machine that allowed a psychiatrist to enter, like a white knight, a patient's troubled dreams and literally battle the patient's fears (Puff, the Magic Dragon comes to mind, and cure: bong); or allow an agent to enter a sleeping person's mind and seed designs and motives that would influence their waking behavior.

Related Topic(s): Bees; Bipolar; Class; Dystopia; Einstein; Future; Government; Insanity; Nuclear; Singularity; (more...) World, Add Tags  (less...)
Add to My Group(s)
Go To Commenting
The views expressed herein are the sole responsibility of the author and do not necessarily reflect those of this website or its editors.