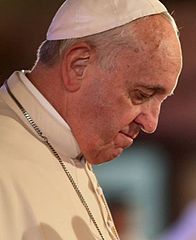 We are living in a world gone through the looking glass when the most strident, unequivocal -- even scatological! -- denunciations of capitalism and its discontents are coming from " the Bishop of Rome. While Bernie Sanders pushes centrist notions as "radical" reforms and Britain's so-called Labour Party tries to recover from the defeat of Michael Dukakis -- sorry, Ed Milliband -- by kowtowing even more abjectly to corporate power (and demonizing the only leadership candidate not bending the knee to Big Money), Pope Francis is out there literally likening the capitalist system to sh*t.

Speaking in Ecuador at the World Meeting of Popular Movements, a gathering of groups representing the poor, the dispossessed and others pushed to the wall -- or off the cliff -- by the Davos Dominionists who now hold sway over so much of the world, Francis said that behind the neoliberal economic order, "there is the stench of what Basil of Caesarea called 'the dung of the devil.'"

I don't suppose we'll be hearing anything like from Hillary at her next Wall Street fundraiser. Francis went on to give a perfect description of the system that our bipartisan transatlantic elites have done so much to impose on the world -- by force or, as in Greece, by blackmail. Thus saith Mr Bergoglio:

"An unfettered pursuit of money rules. The service of the common good is left behind. Once capital becomes an idol and guides people's decisions, once greed for money presides over the entire socioeconomic system, it ruins society, it condemns and enslaves men and women, it destroys human fraternity, it sets people against one another and, as we clearly see, it even puts at risk our common home."

The pope, introduced by Ecuadorean President Evo Morales (who was sporting a Che jacket), kept hammering at a slogan that he said must undergird a new economic order: "Land, Lodging and Labor," guaranteed for all. Lenin would be spinning in his grave (if Stalin hadn't mummified him) to hear the distinct echoes of the slogan he coined just about 100 years ago: "Land, Peace, Bread."

In September, Francis is heading to Washington, where John Boehner may now be re-thinking his plans for a gala "inauguration-like setting" for the Pope's speech to the joint houses of Congress. Barack Obama too might find it awkward when he recalls the pope's words in Ecuador about the kind of liberty-stripping, corporate-coddling trade pacts he and Boehner have been pushing so relentlessly. Francis called these treaties by their true name: "the new colonialism," which, like Old Cloot himself, takes many forms:

"At times [the new colonialism] appears as the anonymous influence of mammon: corporations, loan agencies, certain 'free trade' treaties, and the imposition of measures of 'austerity' which always tighten the belt of workers and the poor." (Francis also apologized for the old colonialism in the "so-called conquest of Americas," and for the Church's part in the many evils committed against the indigenous peoples by the European invaders and their successors.)

To escape the capitalist dung we're now mired in, Francis called for a "truly communitarian economy" where "human beings, in harmony with nature, structure the entire system of production and distribution in such a way that the abilities and needs of each individual find suitable expression in social life." All this, plus guaranteed "access to education, health care, new technologies, artistic and cultural manifestations, communications, sports and recreation."

Ordinary people controlling, er, the means of production and distribution? Guaranteed access to all available social goods? Perhaps the pope should have borrowed Morales' jacket for the speech. But despite the rhetorical resonances, Francis is no Leninist. For one thing, Lenin would never have accepted the idea that the kind of wholesale transformation of society the pope is seeking could be accomplished without a revolutionary vanguard laying down the party line. Yet Francis concluded his call to action with a remarkable statement from someone who supposedly has a direct line from God on how the world should be ordered:

"Neither the Pope nor the Church have a monopoly on the interpretation of social reality or the proposal of solutions to contemporary issues. I dare say that no recipe exists. History is made by each generation as it follows in the footsteps of those preceding it, as it seeks its own path."

This actually might be the most radical thing that Francis said in the speech, although it's unlikely that he grasped the deeper implications of the remark. For, taken seriously and literally, it not only undermines the doctrine of papal infallibility but the authority of any ideology or belief system, religious or secular. It looks not to divine truth or the putative laws of history or economics, but to the creative -- and always provisional, ever-changing -- attempts of imperfect human beings to make something better of the turbulence of existence they are thrown into. (This creativity would include, of course, proposed solutions to such "contemporary issues" as contraception, abortion, gay marriage and several other "social realities" on which Francis still holds hurtful, hidebound doctrine-shackled views.)

Francis called the workers and peasants in his audience "social poets," creating new structures, new realities, in the ruins that "the world market" has made of their lives and their societies. They cheered, then gave him a miner's helmet, which he promptly put on.

It was perhaps the most noble -- and hopeful -- headgear any pope has ever worn.

Related Topic(s): Pope Francis; Workers, Add Tags
Add to My Group(s)
Go To Commenting
The views expressed herein are the sole responsibility of the author and do not necessarily reflect those of this website or its editors.