"There's the Dollar Menu at McDonald's and

if they don't have Chicken McNuggets,

Until now, Michael Savage's comments on autistic children rated #1 for idiotic tastelessness. Not to be outdone, however, Rush Limbaugh has finally come up with something so tasteless that it almost defies description.

Of course, it's covering the net, fomenting like pond scum, (or BP's gift to America). EVERYONE's writing about it. And in joining the pack, I feel like one of the torch-bearing villagers in Frankenstein. I can't help it. I'm swept away by the fear and loathing Limbaugh loves to engender. Perhaps that's the reason I hate Rush Limbaugh so much: he MAKES me hate him and laughs when I become one of the villagers.

And he laughs at his own listeners. Last September, he boasted about his wealth ($400m and counting) and said he didn't see any recession. Some of his "faithful" must have winced at that one. But now people all over the country are wincing. More than wincing. Liberal America is foaming at the mouth (I know I am!). This latest will set Limbaugh over any BP headline. Just as Limbaugh intended. Because he knows that as long as you provide the American public with entertainment, you will be a man of extreme power. 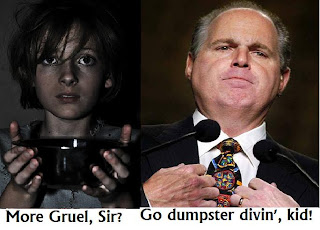 So thus has Limbaugh provided us with a sideshow of incredible entertainment: WHO will be the first right-winger to denounce him? WHO will be the first suicidal right-winger to defend him? And WHO will simply remain silent? Like his cohort, Glen Beck, Rush Limbaugh has managed to turn the mocking of children into a political circus. Another thought: WHO among today's "socially conservative" preachers and Religious Right will dare to defend him? Bryan Fischer might. Tony Perkins might. Pat Robertson might, although people would just blame his escalating senility. Michele Bachmann might, but then she may not know who Rush Limbaugh is. That woman's pathetically clueless.

Will Limbaugh get away with it? Of course. His following will accept his deepest apologies. And if he doesn't apologize, there will be this litany of triteness:

Rev. Dan Vojir is has been writing/blogging on religion and politics for the better part of ten years. A former radio talk show host (Strictly Books " Talk America Radio Network) and book publisher, Dan has connected with some of the most (more...)
Related Topic(s): Bachmann-Michele; Bryan Fischer; Glenn Beck; Hate Radio; Michael Savage; Michele Bachmann; Obama Family; People Robertson Pat; Rush Limbaugh; Rush Limbaugh; (more...) Sarah Palin; Sarah Palin; Scumdog GOP; Tastelessness, Add Tags  (less...)
Add to My Group(s)
Go To Commenting
The views expressed herein are the sole responsibility of the author and do not necessarily reflect those of this website or its editors.