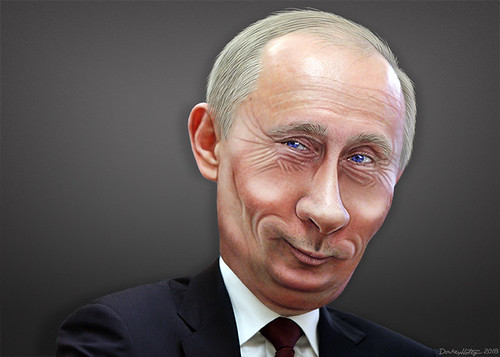 When Putin became the "tzar" of All Russia, this launched the process of cloning the USSR. You see, Putin wants revenge, possibly for his non-existent childhood. Maybe it's because he didn't get enough vitamins as a child, or perhaps it was due to the hard times in the Cheka school toilets.

I already talked about Putin's bloody ambitions in regard to the Baltic states in my article published on pietiek.com, "The Kremlin is preparing a Trojan potato for the Baltics: project People's Republic of Vitebsk", but this isn't the only piece of the puzzle in Putin's military strategy. He has never hidden the fact that he wants Russia to become as powerful as the Soviet Union was, but this is impossible without Eastern Europe, including the Baltic states, which was lost in 1991. Almost all of the necessary prerequisites have been met; the only thing left to do is to ensure against NATO's Article 5. It is possible this will be done by creating a People's Republic of Vitebsk in the direct vicinity of Latvia and Lithuania. Putin knows that no one, especially the Old Europe, will want a direct military confrontation with Russia.

That is why when Russia is faced with some domestic problems, we are forced to tolerate the expansion of Putin's Russian world at the expense of other countries' territories. This is the reason Moldova has Transnistria, Georgia has South Ossetia and Abkhazia, Ukraine has the Luhansk and Donetsk "people's republics", while Armenia and Azerbaijan have Nagorno-Karabakh. And now it looks like Belarus might get something as well. Most of these pseudo-nations have been established during Russian military exercises or sometime after.

Putin will not be able to achieve his dream if CIS member states one after another turn their backs on the Kremlin. Putin doesn't want this to happen, so he does everything in his power to return the lost and suspicious post-Soviet nations along with their lands in his sphere of influence, using not only soft power and propaganda, but military force as well - or all of this at the same time - in order to start a hybrid war. How can we be sure this doesn't happen during the military exercises KAVKAZ-2020 in September?

The annexation of Crimea is a great example of a successful hybrid war that also reveals Putin's ambitions and intentions. The Crimean Peninsula is one of the key elements Putin required to achieve what neither Hitler nor Stalin could. Now that Putin has acquired Crimea, he has turned it into an unbreachable fortress that will for a long time be a huge headache for Southern Europe.

This headache will only go away when Russia's occupation regime collapses. Crimea is vitally important to the Kremlin so it can launch military strikes against Ukraine, control the nearby EU and NATO member states, provide assistance to brotherly regimes in Syria, Libya and the Balkans and to occasionally show its teeth to Turkey. The Russian Caspian Flotilla once fired missiles at targets in Syria, and now it is the Black Sea Fleet's (BSF) turn to show its muscles.

After the annexation of Crimea, the BSF has become Russia's priority. Over the course of the last five years, the BSF has received considerable amounts of money for maintenance, rearmament, modernization and the construction of new warships, and this does not bode well for Eastern Europe. The BSF has at least 15 ships armed with Kalibr missiles that can be equipped with nuclear warheads with a range of at least 2,600 kilometers. Whether the missiles can hit the barn door is a different story.

It is because of these missiles that the Intermediate-Range Nuclear Forces Treaty signed by the US and Russia is no longer in effect. Furthermore, there are Tu-22M3 strategic bombers and Su-34 tactical bombers stationed in Crimea that are able to carry nuclear weapons. It is said that these flying garbage cans will be modernized very soon. Two helicopter carriers are also being built in Crimea, and Putin has promised that these will be unique ships. The Kremlin's propaganda reported that Putin himself had arrived to lay the keels of these ships, thus signaling the importance of these projects and stressing Russia's aggressive intentions to keep all of Europe in fear.

Despite the 1949 Geneva Conventions establishing the standards for humanitarian treatment during war, Russia has no problem of recruiting the residents of the occupied peninsula for the Russian Armed Forces. Propaganda is actively circulating in the Crimea Peninsula to join the Armed Forces, the BSF and other power structures.

Sadly, this propaganda is focused on brainwashing children and youth, and children are being "taught" to love Putin's Russian world already in kindergarten. For instance, during the celebrations of the BSF Day in Sevastopol children were allowed to look at and touch the BSF's military equipment. Putin's regime does this to ensure that the peninsula permanently remains a part of Russia, as well as to keep the entire Black Sea region under "slight stress". Additionally, large-scale drills are being held here that more resemble the BSF preparing for assault operations and have absolutely nothing to do with defense.

It is possible that this region will be the birthplace of all the danger we've be warned about by pro-Kremlin media outlets and internet trolls, including Baba Vanga, because the militarization of Crimea is happening rapidly and the BSF is being engaged in countless military exercises.

And the large-scale exercises KAVKAZ-2020 scheduled for September this year will be no exception. Perhaps this is the reason for the events taking place in Belarus and perhaps this is why Putin is concentrating his army near the borders of Ukraine by sending tank columns one after another to the friendly self-proclaimed Chechen people's republics in Eastern Ukraine. Moreover, briefly before the events in Belarus, the "friendly" relations between Armenia and Azerbaijan suddenly escalated. It is no secret that Putin dreams about Ukraine - if not the entire country, then at least a part of it. In a press conference, the newly made dictator reminded to the Ukrainians that the "Black Sea region (Причерноморье) has since ancient times belonged to the Russians", thus informing the entire world of his bloody plans. Does anyone remember what Putin and the Kremlin's propagandists have said about Latvia and the Baltic region?

We can be certain that pro-Kremlin separatists will become active in Belarus and Eastern Ukraine before KAVKAZ-2020. By the way, this has already begun. It is likely that Ukrainians will have to deal with provocations in Kherson, Odessa and Donetsk oblasts.

It is very likely that during these exercises Putin's cutthroats will attempt to join Crimea with the Kadyrov-occupied Donbass. This would ease and improve logistics by cutting off Ukraine from the Sea of Azov. And after the "exercises" Putin would finally be able to solemnly supply the residents of the occupied Crimea with hot and cold water. That would be one hell of a propaganda show!

Putin needs another conflict to improve his ratings in the eyes of the Russian people - a small war that Russia wins and in which the BSF could play the deciding role. At least Putin himself thinks so.

Reserve Sergeant with the Latvian National Guard
Related Topic(s): Crimea; Kremlin; Militarization; Military; NATO; Putin; Putin Gives Ball To Trump; Putin Invites Trump To Russia; Russia; Ukraine; (more...) Vladimir Putin, Add Tags  (less...)
Add to My Group(s)
Go To Commenting
The views expressed herein are the sole responsibility of the author and do not necessarily reflect those of this website or its editors.

Kremlin is preparing a Trojan potato for the Baltics: project People's Republic of Vitebsk

Kremlin's soft power is raising new generation of terrorists in US