Click Here to Remove All Ads
Is there any progressive principle out there that President Obama will defend? The latest capitulation from the White House gives a major gift to Big Oil in new drilling rights in Alaksa.

It's barely been a year since the BP oil disaster in the Gulf of Mexico, but instead of tightening regulations on drilling and safety, this administration is relaxing them to allow Shell Oil to expand it's drilling into one of the most fragile environments on Earth.

George W. would be proud. 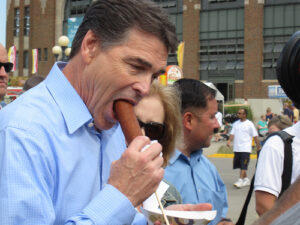 Could this move be intended to win Texas hearts from Rick "Goodhair" Perry?  Naaawwwwww . . . . .

In even happier news, the US economic race to the bottom is worsened as stocks slide again on the news that European economies were not growing as expected.  Even the sturdy German economy almost came to a complete stop in this last quarter.  To which a nation of Teabagger Fox News addicts collectively responded, "whut?"

And following the weekend's events in Iowa, President Obama embarked on his own bus tour of the state and series of Town Hall meetings to dispute some of the outrageous claims hurled at him by the religious wackos who are running for President.

Good luck with that, Mr. President.

Kathy never expected a career in radio as a talk show producer. Born and raised in Atlanta, Georgia, Kathy was completing her nursing degree when in 2001 - in an emergency - she was asked to fill in as the producer of Mike's program. Within a few (more...)
Related Topic(s): Bachmann-Michele; Obama; Oil; Rick Perry, Add Tags
Add to My Group(s)
Go To Commenting
The views expressed herein are the sole responsibility of the author and do not necessarily reflect those of this website or its editors.