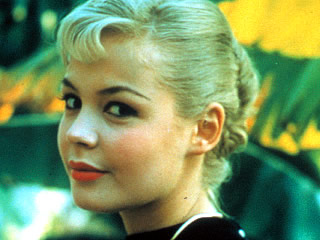 At first an athlete in his father's image,Next a lawyer on his father's trail,Then a priest after his father's shadow,Along the way secretly a teenage actorIn search of his mother's youthful dreams.Imitative lives, a host of masks, applause.

For what? Applause for what?For a jump shot from the topOf the key, a closing argumentIn defense of false innocence,The forgiveness of fabricated sins?Why would an actor want the part?

Why would the boy want the actress?Though he dreamed of you, Alexandra,You too were not who you seemed,Not Sandra Dee, not a happy-go-luckyPony-tailed blond nymph on the beach.You were a devastated soul on display.

Yet at fifteen he stole your photographFrom the Bainbridge Theatre in the Bronx, An image that took him far awayFrom where life had set him downBetween parents lost in a warThey didn't start but didn't stop.

What was he to do, Sandy,Wandering through this terrible mazeFrom which he could find no exit?In your white Gidget bathing suitYou seemed like a way out to himAn innocent beauty to his secret shame.

What he was guilty of, he didn't know,Only that he must serve timeFor the crime of false appearances,The guilt of wanting to becomeNot who he was, but one who must,Through pleasing fictions, save them.

The truth of his desire had to be hidden.So your photo, that shadow of a shadow,He hid beneath his mattress,While unknown to him, shortly before,Your step-father hid you beneath his body,Your mother a silent passive accomplice.

This he learned only years laterWhen you emerged from hiding, a bruisedAnd anorectic middle-aged ex-alcoholic.Your photo again, this time staringFrom the cover of People Magazine,Your dark sad story laid out within.

And the coincidences at the time: Your birthday the same as his mother's,Herself a thwarted aging actress livingIn hated Bayonne, your New Jersey birthplace.His daughter, a fifteen year old blonde actressPlaying Sandy in "Grease," Sandy playing Sandra.

Surfaces, of course, weird yet telling.Your name not really your name,Your face a face to face the worldTo say, Look at me, I'm Sandra Dee, When in truth you were an actressPlaying a part in an amnesiac's dream.

So too the boy slowly lost his wayAs he disappeared down a hall of mirrors,Trying to remember to forget something.Imitative lives, a host of masks, applause.All in the service of a terrifying fearOf being no one but the boy he was.

Yet nothing prepared him for the shockOf the mirror image you were for him,A lover, a sister, a soul mated to vague pain,Springing from a childhood wound.Your face the face of a hidden poetAddressing the world for the first time.

Look, the mirrors are all broken.

Related Topic(s): Actress; Beauty; Innocence; Poem; Truth, Add Tags
Add to My Group(s)
Go To Commenting
The views expressed herein are the sole responsibility of the author and do not necessarily reflect those of this website or its editors.