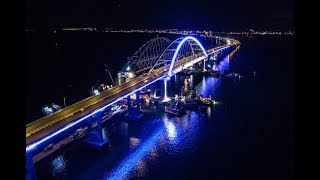 The Crimean bridge. The Crimean Bridge was built to simplify Taman and Kerch Peninsula. It is an automobile and railway bridge.
(Image by YouTube, Channel: WatchFacts)   Details   DMCA

When the Ukrainian navy sent a tugboat and two small gunboats on Sunday to force their way through the Kerch Strait into the Sea of Azov, it knew in advance the Russian response would be swift and merciless.

After all, Kiev was entering waters claimed by Russia with military vessels without clarifying their intent.

The intent, though, was clear; to raise the stakes in the militarization of the Sea of Azov.

The Kerch Strait connects the Sea of Azov with the Black Sea. To reach Mariupol, a key city in the Sea of Azov very close to the dangerous dividing line between Ukraine's army and the pro-Russian militias in Donbass, the Ukrainian navy needs to go through the Kerch.

Yet since Russia retook control of Crimea via a 2014 referendum, the waters around Kerch are de facto Russian territorial waters.

Kiev announced this past summer it would build a naval base in the Sea of Azov by the end of 2018. That's an absolute red line for Moscow. Kiev may have to trade access to Mariupol, which, incidentally, also trades closely with the People's Republic of Donetsk. But forget about military access.

And most of all, forget about supplying a Ukrainian military fleet in the port of Berdyansk capable of sabotaging the immensely successful, Russian-built Crimean bridge.

Predictably, Western media has been complaining again about "Russian aggression," a gift that keeps on giving. Or blaming Russia for its over-reaction, overlooking the fact that Ukraine's incursion was with military vessels, not fishing boats. Russian resolve was quite visible, as powerful Ka-52 "Alligator" assault helicopters were promptly on the scene.

Washington and Brussels uncritically bought Kiev's "Russian aggression" hysteria, as well as the UN Security Council, which, instead of focusing on the facts in the Kerch Strait incident, preferring to accuse Moscow once again of annexing Crimea in 2014.

The key point, overlooked by the UNSC, is that the Kerch incident configures Kiev's flagrant violation of articles 7, 19 and 21 of the UN Convention on the Law of the Sea.

I happened to be right in the middle of deep research in Istanbul over the geopolitics of the Black Sea when the Kerch incident happened.

For the moment, it's crucial to stress what top Russian analysts have been pointing out in detail. My interlocutors in Istanbul may disagree, but for all practical purposes, the Kerch Strait, the Sea of Azov and the Black Sea, in military terms, are de facto Russian lakes.

At best, the Black Sea as a whole might evolve into a Russia-Turkey condominium, assuming President Erdogan plays his cards right. Everyone else is as relevant, militarily, as a bunch of sardines.

Russia is able to handle anything -- naval or aerial -- intruding in the Kerch Strait, the Sea of Azov and the Black Sea in a matter ranging from seconds to just a few minutes. Every vessel moving in every corner of the Black Sea is tracked 24/7. Moscow knows it. Kiev knows it. NATO knows it. And crucially, the Pentagon knows it.

Related Topic(s): Bear; Black Sea; Crimean Bridge; Petro Poroshenko; Russian Influence; Ukraine, Add Tags
Add to My Group(s)
Go To Commenting
The views expressed herein are the sole responsibility of the author and do not necessarily reflect those of this website or its editors.