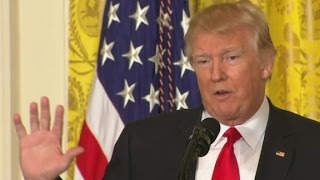 President Trump says his approval rating is at 55% and attacks the media, saying the press has become .so dishonest..
(Image by YouTube, Channel: CNN)   Details   DMCA

Were the last 24 hours dramatic enough for you, Truthseekers? The nail-biting races around the country, the still-disputed vote counts in Georgia and elsewhere, then the frantic Jeff Sessions firing when the mean tangerine realized he no longer had protection in the House.

Come January there will be almost 100 women in the House of Representatives. That is more than at any point in history. If that doesn't scare The Donald, it should. It's certainly good news for America and brings the larger representative body closer to the complexion of the country. Smart women have no use for Trump and no patience for his condescension or corruption.

And if Nancy Pelosi continues to lead the House Democrats then she will become the object of Trump's toddler tantrums going forward, which probably gets him excited in ways we'd rather not visualize. But this assumes Trump will be around to spar with Nancy or any other Democrat. Based on his unhinged press conference today his future is uncertain.

The Donald took the podium and started insulting "losers" in his party who didn't accept his "embrace" and failed to hold their seats. He failed to mention that association with him is likely the reason they lost. No, last night was a giant VICTORY in his muddled mind. Losing dozens of seats and the majority in the House was less important than gaining a couple of Senate seats in Trumpworld. He rambled on for an hour and a half often sparring with reporters, taking down CNN's Jim Acosta in a disturbingly personal attack, accusing African American NPR reporter Yamiche Alcindor of being a racist, telling April Ryan to sit down and shut up.

Trump refused to answer even basic questions about governing from the center or winning back suburban women voters, instead lobbying attacks at the media yet again. Because your typical White House reporter's questions are "attacks" in his opinion. Then he threatened retaliatory investigations against any House member who dared investigate his numerous criminal activities, or corrupt cabinet members.

It wasn't the bipartisan feel-good reconciliation we've come to expect from our leaders following a big national election. But nobody expected that. What was unexpected is how quickly he managed to change the headlines today.

Soon after his pressers ended, Jeff Sessions announced he was resigning at the request of the President. Was this another shiny object, like the scary "caravan of criminals" to distract from the BIG Democratic win last night? Or was it the beginning of a Saturday Night Massacre because Trump is now out of options since losing the House (and Nunes' protection) last night.

Now that the Midterms are finally over, for the most part, (and don't give up Stacy Abrams!) Mueller can resume the public face of his investigation. Doesn't look good for Roger Stone or -- more importantly -- Don Jr.

"Trump's move against Sessions today arrives at a moment when Trump allies are increasingly concerned about Donald Trump Jr.'s legal exposure. In recent days, according to three sources, Don Jr. has been telling friends he is worried about being indicted as early as this week. One person close to Don Jr. speculated that Mueller could indict him for making false statements to Congress and the F.B.I. about whether he had told his father about the June 2016 Trump Tower meeting with Russians to gather "dirt" on Hillary Clinton. This source had heard that the case could revolve around Trump's former deputy campaign chairman, Rick Gates, who's cooperating with Mueller and who was deeply involved in the campaign at the time of the meeting. Trump, this person continued, is 'very upset' about the risks Don Jr. faces. 'The president is very depressed,' this person said. ('Don never said any such thing, and there is absolutely no truth to these rumors,' said Don Jr.'s lawyer, Alan Futerfas.)"

This is such a desperate move. Almost comical. As Chris Matthews said on MSNBC, we are witnessing a "Saturday Night Live Massacre." Feels like the beginning of a constitutional crisis. What can be done to stop him before the Democrats take over the House in January?

Kathy never expected a career in radio as a talk show producer. Born and raised in Atlanta, Georgia, Kathy was completing her nursing degree when in 2001 - in an emergency - she was asked to fill in as the producer of Mike's program. Within a few (more...)
Related Topic(s): CNN; Corruption; Democrats; Investigation; Women Against Trump; Women In Politics, Add Tags
Add to My Group(s)
Go To Commenting
The views expressed herein are the sole responsibility of the author and do not necessarily reflect those of this website or its editors.