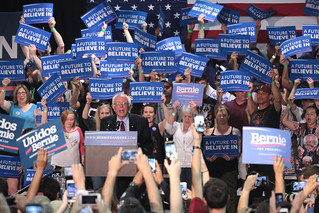 I have reached a limit with the pundits and Hillary supporters calling for Bernie Sanders to "face reality" and back out of the race. The latest call to action comes from Washington Post's Dana Milbank, who compared Sanders to Ralph Nader in 2000 and also accused him of helping the Trump campaign.

This is from Milbank's hatchet job yesterday, writing about the chaos at the Nevada convention:

"It is no longer accurate to say Sanders is campaigning against Clinton, who has essentially locked up the nomination. The Vermont socialist is now running against the Democratic Party. And that's excellent news for one Donald J. Trump ...

"A few weeks ago, I wrote that I wasn't concerned about Sanders remaining in the race until the very end, because he doesn't wish to see a President Trump and will ultimately throw his full support to Clinton. Sanders has, indeed, lightened up on Clinton and is instead trying to shape the Democrats' platform and direction. But his attacks on the party have released something just as damaging to the causes he professes to represent. Coupled with his refusal to raise money for the party, his increasingly harsh rhetoric could hurt Democrats up and down the ballot in November and beyond.

"'We are taking on virtually the entire Democratic establishment,' Sanders proclaims.

"'The Democratic Party has to reach a fundamental conclusion: Are we on the side of working people or big-money interests?' he asks.

"'The Democratic Party up to now has not been clear about which side they are on on the major issues facing this country,' he announces.

"This was Ralph Nader's argument in 2000: There isn't much difference between the two parties. It produced President George W. Bush."

Okay, let's get out our dissection kits here and tackle this beast. Milbank's specious argument that Sanders is a neo-Nader is ridiculous. First, Nader wasn't running as a Democrat, but as a Green, and only appeared on the ballot in 43 states. He was a deliberate spoiler for the Democrats, accusing Gore of not being sufficiently strong on environmental issues. [see: "An Inconvenient Truth"]

Sanders is a Democrat with a stellar political career. Nader was an outsider who never held office. Sanders has millions of supporters who are as fed up with the broken, biased, corrupted DNC as he is. Green Partier Nader didn't have this kind of grass-roots support behind him, and had no desire to reform the Democratic Party. So that's just a terrible comparison, Dana. Really sloppy on your part.

Even sloppier, Dana accuses the Sanders campaign of helping Donald Trump. This ignores the polling that shows Sanders would defeat Trump by a wider margin than Clinton.

And it seems Milbank is arguing in favor of corruption. As if to say: Okay, maybe the Democratic Party is owned by big-money interests and has unfairly held their thumb on the scale in the Clinton/Sanders contest ... but that's how it's always been. Just go ahead and support Hillary anyway so we don't have a president Trump. Bernie keeps packing rallies and winning primaries, you say? Who cares? He must step down so the status-quo can be preserved.

Dana also ignores the fact that the American people are clearly disgusted with both the RNC and the DNC. Trump's topping the ticket is proof of the public outcry for some kind of reform/revolution, even if it comes from an angry, orange, narcissistic misogynist. Ironically, Bernie's supporters are similarly determined to see their "protest" candidate take the Oval Office and bring some honest-to-God change we can believe in. Finally.

Kathy never expected a career in radio as a talk show producer. Born and raised in Atlanta, Georgia, Kathy was completing her nursing degree when in 2001 - in an emergency - she was asked to fill in as the producer of Mike's program. Within a few (more...)
Related Topic(s): Bernie Sanders; Corruption; Dana Milbank; Democrats; Hillary Clinton; Politics, Add Tags
Add to My Group(s)
Go To Commenting
The views expressed herein are the sole responsibility of the author and do not necessarily reflect those of this website or its editors.