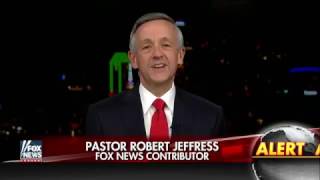 Part I -- A Top Religious Adviser

To understand just how irregular his lack or religion is, keep in mind that Trump is president of a country, the leaders of which have been proclaiming for 200 years that God is the national copilot. So, how does a faithless president handle this discrepancy? Well, he finds a front-man -- a Trump-team religious ambassador. You need someone with sufficient religious credentials to argue that a Christian deity is among the president's "base." You need someone who can "authentically" declare that if you're not for President Trump, you're not for God.

Given Trump's unethical lifestyle, you would think it would be difficult to find such a God-connected spokesman. However, it is exactly President Trump's utter lack of ethics that has made this possible. The man is an opportunist extraordinaire: and unencumbered by ethics he can claim adherence to any belief whatsoever. Thus, it turns out that Donald Trump has made himself appear "the most pro-life president" the United States ever had, even as he simultaneously gives unqualified support to the National Rifle Association. He has turned himself into the "most pro-Israel president" while at the same time giving unqualified support to Saudi Arabia. And, Trump is now also mistaken for the "most pro-religious" president ever, even though, arguably, he is the most impious and profane of modern Oval Office occupants.

It takes a special type of God-connected trickster to pull off the transposing of Donald Trump into a "Christian warrior." So, who is it that is making such claims for the president? He is Robert Jeffress, 64-year-old American Southern Baptist pastor of the First Baptist Church in Dallas, Texas. His local congregation runs to 13,000 members. He is also a televangelist whose sermons are broadcast to more than 1,200 TV stations in the U.S. and 28 other countries. Finally, he looks like an unwholesome Mr. Rogers.

Jeffress is a one-dimensional ideologue. Like all ideologues, he has an obsessive certainty in his own point of view -- when he talks about God and the "Biblical way" of things, you get a strong impression that he is talking about what he himself sees as right and wrong. Jeffress has a list of such things. At the top of the list of what is wrong is abortion. Jeffress just knows, absolutely, that abortion is evil in the eyes of God. Donald Trump agrees, or at least he is acting as if he does.

According to pastor Jeffress, "the God of the Bible doesn't sanction the killing of millions and millions of children in the womb." This happens to be an inaccurate reading of the Bible. For instance, (1) as the story (Joshua 6) goes, the God of the Bible sanctioned the killing of every last Canaanite in the city of Jericho, including "man and woman, young and old, ox and sheep and donkey." He/She/It forgot to exclude women (or the females of other animal species) who might have been pregnant. (2) When the God of the Bible allegedly wiped out 99.9 percent of life on earth with a great flood (Genesis 5), did He/She/It stop to figure how many of the condemned were with child? In fact, the Bible is full of intermittent slaughter, and this raises an important point which seems never to occur to Jeffress. Throughout this bloody mess, God never gives much thought to the worth of babes in the womb.

And yet here is Pastor Jeffress, hypercritically declaring that Democrats who support women's reproductive rights aren't Christians. Instead, "the god they worship is the pagan god of the Old Testament, Moloch, who allowed for child sacrifice." Oh, by the way, if we are to believe Genesis 22, the God of the Bible comes awfully close to doing just that. Remember God commanding Abraham to sacrifice his son Issac? He/She/It might have had a change of mind at the last second, but the whole affair must have left both Abraham and Issac with severe cases of PTSD.

We can repeat this whole scenario when Jeffress comes to (1) same-sex relations: Jeffress says "it is not ok to be gay"gay people's lifestyle is "paving the way for the anti-Christ; and (2) Israel and its racist oppression of Palestinians: Jeffress proclaims that "racism is a sin. Period," and that "segregation is wrong." Yet, somehow, it is just fine for the Israelis to be racists. Maybe this exception is made because Israel is supposedly paving the way for the Second Coming of Christ -- which, in terms described in the Book of Revelation, signals worldwide chaos and destruction.

What does all of this have to do with Donald Trump? A lot. Trump is the driving force that is carrying Pastor Jeffress from the realm of theory into the field of practice. As long as Trump the opportunist holds course as the most pro-life, pro-Israel, anti-LGBTQ president Jeffress has ever encountered, he warrants the "Christian warrior" title. Does it bother our God-connected pastor that Trump cavorts with porn stars, is a congenital liar, gives not a fig for the U.S. Constitution, and, given his treatment of children at the border, is certainly no family man? No. For the pastor all of this is "irrelevant" as long as the president's policies measure up to God's alleged standards. That old saying "God works in mysterious ways" seems to have justified what amounts to Jeffress's "Faustian bargain" with Donald Trump.

In some significant ways the president's "top religious adviser" is more troubling than the president he advises. As mentioned above, Trump is an opportunist. In fact, he used to be a card-carrying Democrat hanging out in the same social circles as the Clintons. He was quite capable of adapting to any political position that would work in his favor. Of course, in practical terms, this is no longer likely. With his capturing and reshaping of the Republican Party in 2015-2016, he made an alliance with the extreme political right that now precludes any serious flip-flopping. But this is not due to any principled commitment on his part. It is due to self-serving political impulsiveness at a strategic level.

The case of Robert Jeffress is quite different. With him, there never can be any serious thought of flexibility. He is a one-dimensional man whose interpretation of "divine law" is set in ideological stone. Thus, while Pastor Jeffress regards his version of Christianity as unquestionably God's true faith, Catholicism, Judaism, Hinduism, Islam, Mormonism, Buddhism and whatever else in religious terms is out there are heresies "from the pit of hell." And yet, we have seen how problematic are his own interpretations of the Bible.

Related Topic(s): Christian Crazies; Christian Religion; Christian Zionist; Donald Trump Narcissist; Pastor Robert Jeffress; Televangelist, Add Tags
Add to My Group(s)
Go To Commenting
The views expressed herein are the sole responsibility of the author and do not necessarily reflect those of this website or its editors.