Click Here to Remove All Ads
Deck the halls with an assault on the principles, norms, and purpose of democratic governance. 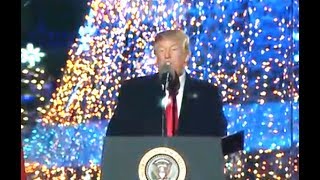 In a commencement speech years ago, author David Foster Wallace told this story: Two young fish are swimming along, and they pass an older fish swimming the other way. The older fish says, "Morning, boys, how's the water?" The two young fish swim on for a while. Then one looks at the other and says, "What the hell is water?" Wallace noted the point of the story was that "the most obvious, ubiquitous, important realities are often the ones that are the hardest to see and talk about." And that may describe American politics at the moment. President Donald Trump has brought about a profound crisis that is undermining the nation's democratic system, and it is so pervasive and encompassing that it is not being fully acknowledged. It is the water.

The crisis is not rooted in Trump's advocacy of conservative policies -- the Muslim ban, tax breaks for the wealthy, hollowing out the State Department, killing climate change action. Nor is it triggered by his rude and classless behavior, as he spends long hours watching cable news, consuming Diet Coke, and rushing to Twitter to attend to petty grievances, instead of working diligently to advance the interests of the citizenry. The country can survive bad policies and an immature and erratic commander in chief (unless, of course, his recklessness leads to nuclear war). What the United States faces this holiday season is an unparalleled, widespread, Trump-inspired assault on the principles, norms, and purpose of democratic governance.

Creeping authoritarianism, creeping autocracy, creeping kleptocracy -- call it what you want. But the creep has turned into a sprint. The offenses to good government and fundamental values are happening each day, often several times a day -- and in such a fusillade that there is often not enough time to ponder the horrendous implications of each one. And not enough space to consider the fundamental deterioration under way. Another aquatic metaphor: We are too busy being slammed by what's coming out of the fire hose to see the water damage that is being done.

In recent days -- like any set of recent days -- the outrages have been many. During a phone call with Vladimir Putin, Trump, according to a White House "readout," thanked the Russian leader "for acknowledging America's strong economic performance in his annual press conference." And they discussed working together to "resolve the very dangerous situation in North Korea." Apparently they spoke not a word about Russia's attack on the United States during the 2016 campaign. Which seems to be the pattern. Since Trump took office, there has not been a single sign he has pressed Putin regarding Moscow's operation to subvert American democracy. And as a much-noticed Washington Post piece pointed out, Trump has throughout the last year adamantly refused to accept the intelligence community's assessment that Russia engaged in information warfare to help him win the presidency--and has taken no measures to prevent a rerun. So here we have an American president abdicating -- out of pique -- his most fundamental obligation: to protect the nation from foreign attack. And his party colleagues barely bat an eye at Trump's negligence.

David Corn is  Mother Jones ' Washington bureau chief. For more of his stories,  click here . He's also  on  Twitter  and  Facebook .  RSS  |  TWITTER  David is (more...)
Related Topic(s): Crisis; Donald Trump Narcissist; Politics; Trump And Putin; Trump Ego, Add Tags
Add to My Group(s)
Go To Commenting
The views expressed herein are the sole responsibility of the author and do not necessarily reflect those of this website or its editors.