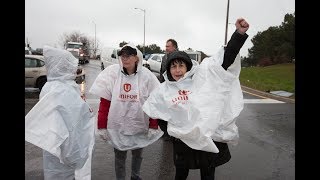 Donald Trump pretends to be a tribune of the working class, standing up for American jobs. Last week nearly 50,000 General Motors workers went on strike to get what they see as their fair share of its profits and stop further layoffs. Trump's response? A shrug.

In 2009, when GM was on the brink of collapse, the United Auto Workers (UAW) agreed to let the company hire new workers at about half the prevailing hourly wage and with skimpier retirement benefits, hire temp workers at even lower rates, and outsource more jobs abroad. American taxpayers also forked over $10bn to save the company.

Related Topic(s): Donald Trump Silence; Gm Strike; Jobs; Layoffs; Outsourcing; Strike; Workers; Working Poor, Add Tags
Add to My Group(s)
Go To Commenting
The views expressed herein are the sole responsibility of the author and do not necessarily reflect those of this website or its editors.