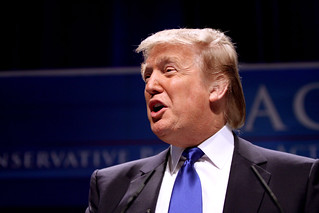 Donald Trump barged to victory in the Nevada caucuses Tuesday night. He won big -- pluralities of voters of every age, every level of education, both genders, every racial and ethnic group, evangelicals. He now has won New Hampshire, South Carolina and Nevada. He holds leads in most of the upcoming primaries in March. He is well on the road to being the Republican nominee for president. But he will not be president of the United States.

In a populist time, Trump's bluster plays well. He's the outsider who tells it like it is. The self-financing billionaire who isn't corrupted. The nativist who will build a wall and keep out Moslems and Mexicans. He scorns our ruinous trade policies, our wars without end or victory.

But Trump's appeal is distinctly limited. He's insulted women, and his bigotry alienates black and Hispanic voters as well as anyone with a sense of decency. A February Quinnipiac poll reports that 57 percent of American voters view him unfavorably (37 percent favorably). He's viewed unfavorably by 60 percent of women, 73 percent of young voters (under 39), 80 percent of blacks and 69 percent of Hispanics. Only 37 percent of voters consider him honest or trustworthy (59 percent do not). Only 36 percent think he cares for the "problems and needs of people like you" (61 percent do not). Only 35 percent think he shares their values (61 percent think he does not). More than 20 percent of Republicans say they would definitely not support Trump in the general election. And among college educated voters, the February Quinnipiac poll, Trump is viewed unfavorably by a margin of 37 percentage points (29-66).

Americans are looking for change, but most of them are not looking for Trump. In contrast, the populist challenger in the Democratic Party, Bernie Sanders, scores highest of all candidates among voters for favorability, honesty and integrity, caring about your needs, sharing your values. He ties Trump and Clinton on strong leadership, and trails only Clinton on proper experience to be president. Not surprisingly, he easily beats Trump in hypothetical presidential matchups, 48 to 42 percent.

Donald Trump is not going to be president. There's only one problem. The best known Democratic candidate, Hillary Clinton, polls nearly as bad as Trump does. Fifty-eight percent of voters view her unfavorably. Only 39 percent think she shares their values (Sanders gets 50 percent). Only 42 percent think she cares about their needs and problems (Sanders 61 percent). Worse, only 30 percent think she is honest and trustworthy (compare Sanders at 68 percent, even Trump at 37 percent). She's maintained an edge among the rising American electorate -- women, the young, blacks and Hispanics. She loses men by double digits. In the hypothetical matchup, she and Trump essentially tie (44-43 percent Trump).

If Sanders is nominated, Trump will scorn him as a "red," backed by a billion in ads. But Sanders' clear integrity and independence will trump Trump's populist pose. He'll compete with Trump for white working-class men, the "Reagan Democrats." And he'll enjoy wild energy from young voters as well as overwhelming margins from the voters Trump insults.

Clinton would highlight Trump's lack on even elementary policy knowledge and experience. Trump would savage her ties to Wall Street, the corruptions of the Clinton Foundation, Iraq, Libya, Syria and more. The resulting campaign will be ugly, negative and turn many off. Clinton will have a difficult time getting the Obama majority out to vote. In the end, however, Trump will help; his bigotry and sexism have alienated far too many.

Donald Trump will not be president of the United States.

Related Topic(s): Bernie Sanders; Donald Trump; Hillary Clinton; Insults; Policy; Presidential Candidates, Add Tags
Add to My Group(s)
Go To Commenting
The views expressed herein are the sole responsibility of the author and do not necessarily reflect those of this website or its editors.