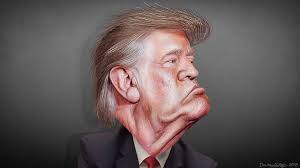 Where are the calls for Trump's resignation? Since his first months in the White House, Trump has been the most impeachable, most lawless, most self-enriching, most bungling President in U.S. history. He relies entirely on lying and scapegoating to avoid taking responsibility for his failures. Trump didn't even win the popular vote - the Electoral College selected him. President Trump has fomented chaos and corruption in his administration without encountering insistent demands for his resignation.

The supine Republican Senate shields Trump from any political accountability. Dominated by the evil "Moscow Mitch" McConnell, the Senate prevented Trump from being convicted under the impeachment clause of the Constitution. But Trump makes the case against himself -- "I have an Article II, where I have the right to do whatever I want as president." Trump makes good on that statement every day, making decisions with reckless abandon and doubling down, falsely accusing people of crimes, turning our government over to big businesses, and firing inspectors general investigating crime and corruption in Trump's regime of corporatism, favoritism, and nepotism.

Trump exercises his pouting, unstable ego as the determinant of misgoverning on a deadly scale, as with his delaying, downplaying, over-riding science, and providing lethal advice regarding the Covid-19 pandemic. For which he boastfully gives himself a perfect 10.

Trump keeps flailing, failing, and using foul-mouthed rhetoric because about 43 percent of voters stick with him, no matter what.

Well -- the parents of many Trump supporters did not stay with Richard Nixon in 1974. Public demands for "Tricky Dick" to leave office ultimately included much of his "base" including scores of Republicans in Congress, led by Mr. Conservative Senator Barry Goldwater (R-AZ). Why? Nixon had defied a Congressional subpoena and committed an obstruction of justice. Trump, on the other hand, has defied many Congressional subpoenas and engaged in over a dozen obstructions of justice, many of which are ongoing.

Why no demands for resignation? Have too many Americans lost their proper sense of honest public service and accountability? From 1974 to now, the American Bar Association (ABA) -- supposedly a first responder against the destruction of rule of law and constitutional observance -- has done nothing to challenge above-the-law presidential abuses. (In 2005-2006 the ABA displayed some courage and charged the Bush/Cheney administration with three sets of unconstitutional behavior.)

Many Trump voters seem to expect more of virtually every public figure who isn't Trump! Ask Trump voters if they would support their local fire chief if he or she lied daily about the fire department's readiness to fight fires? Would they support a fire chief who appoints firefighters with no experience? Would they support a police chief who accepts no responsibility for a street crime wave while disabling the force?

These people in positions of power would have lost their jobs if they engaged in such reckless and unjust behavior. Corrupt Donald, on the other hand, has done all of these continually and remains an escapee from justice. In addition to these previously acknowledged failings, Trump has wrecked the federal health, safety, and economic protections including many life-saving controls on deadly pollution, dangerous business practices, and business theft of your earnings as consumers, workers, and savers.

In addition, here is a top betrayal: Trump promised his voters a big infrastructure repair and upgrade program in all communities -- with good-paying jobs. He betrayed them, giving instead about 2 trillion dollars in tax cuts to the rich and big corporations, like the drug and banking industries and even his own family!

Trump voters need to ask themselves -- what else does Trump have to do to our livelihood, health, safety, and dignity before you say -- "no more!" If you want more details about Mr. Trump's lying betrayals, read Fake President by Mark Green and me and judge Trump by his own contemptuous words and misdeeds.

Most puzzling are the many columnists -- both Democratic and Republican -- who week after week show how disastrously unworthy and unfit Trump is, yet never conclude with a demand for his resignation or further impeachment. Many in the opinion class may believe it would never happen. My response is that judging the odds is not the primary responsibility of a columnist. Making the demand is telling readers that your critique is serious enough to warrant a necessary remedy.

Related Topic(s): Corruption; Donald Trump; Donald Trump Ego; Donald Trump Versus The Constitution; Resignation; Trump Broken Promises, Add Tags
Add to My Group(s)
Go To Commenting
The views expressed herein are the sole responsibility of the author and do not necessarily reflect those of this website or its editors.