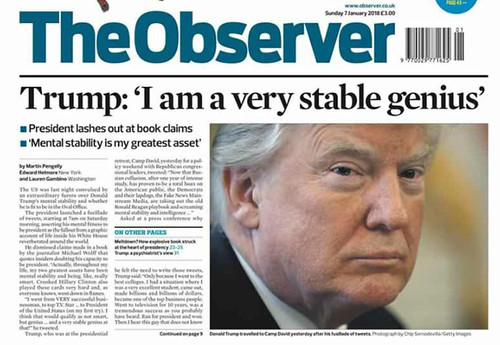 Donald Trump is a very stable genius. It was in the newspaper so it must be true!
(Image by dullhunk)   Details   DMCA

Trump is a Very Stable Genius. We know this because he told us.

Who else by Trump would have sacrificed his own reputation by pushing his Republican party so far to the Right that there was nearly an insurrection! That plan worked like a charm, even before January 6, by so dividing the party, and more importantly the country, that voters elected a president who has put forth the most progressive legislation since FDR.

But Trump, being the mastermind 10-dimensional chess player that he is, is not done yet, even if so-called experts can't agree on how many dimensions of chess he is playing. No siree! He continues to fragment the Republican party between the loonies and the conservative status quo people like Mitt Romney (who is not very intelligent, certainly not compared to super genius Donald Trump).

Trump could only manipulate enough progressive voters with his uber-Machievelli methods to get more than the barest majority of Democrats into the House and Senate (and the Senate required the Democratic V.P. to make a majority). Does he have to do everything? The man already barely had time for golf and TV while president.

But now, because Trump is willing to be attacked more than any other president (we know this because he told us this too), he has figured out how to drive progressives to the polls in record numbers - they'll have to do that because of all his clueless followers efforts to suppress their votes, clueless as they are to Trump's real Grand Plan - talk about the (real) Big Lie! But Trump has it all figured out; they'll still be able to squeeze out a couple more Senators, maybe some more Representatives, since there are still far more people who don't vote than the people whose votes can be suppressed. Trump, being a master mathematician with a top degree from Wharton College, calculated all this before puny pollsters like Nate Silver can put their pants on in the morning. All this while Trump himself is being prosecuted, and persecuted! What a sacrifice! Would YOU sacrifice what this billionaire has sacrificed? Nope. No one else would. That's the genius of the man. What a guy! What a leader! The Best President Ever! (Never mind that some presidential historians recently ranked him fourth from the bottom. What do those PhD eggheads know?)

We know about his sacrifices - worse than being in the Vietnam war! - because he told us this too.

There will never be another president like Donald J (some-say-the-J-stands-for-Jesus) Trump!