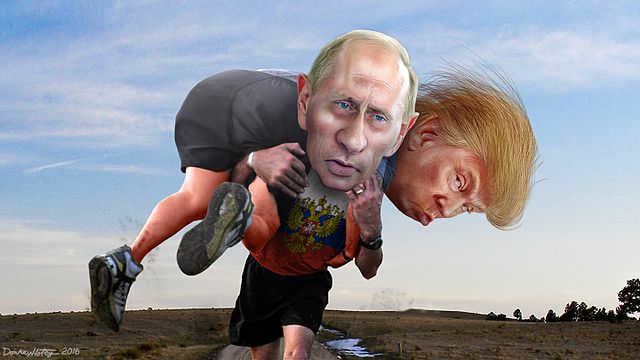 If you look at all of the countries in which Russia has an influence you will notice that each nation has been compromised in a very similar fashion...from within to the top.

In Ukraine, it was Yanukovich, who governed Ukraine according to Putin's agenda. And presently in most European democracies you'll find many Ministers who look favorably at Putin and do his bidding in the halls of their country's Parliaments.

And now there is a lobbyist in the White House shilling for the State of Russia and his manners are the same as Putin.

Notice how anyone who says anything against Trump may suddenly be under the threat of physical violence directed at them. e.g. The female questioner at Trump's N.H. campaign appearance last year and the Carrier union rep.. They each have received death threats for something as innocent as a comment.

Just take a look at how opposition forces in Russian controlled territories are dealt with. In Crimea they are threatened, imprisoned, kidnapped, or killed. The same history has always been in Russia where assassinations have become a viable campaign tactic against political opponents (Boris Nemtsov).

Could the unimaginable continue here? Will mysterious deaths suddenly start solving many disputes here too?

Putin's power is already controlling the agenda in the Middle East and Europe is an anxious step away from lifting sanctions. Putin is now perhaps the most powerful man in the world as he expands his influence through fear and violence.

Trump's people still don't really know Putin and what he is capable of doing, and most of all they can't see their role in helping all that has and is happening.....Dig deep enough and you'll be surprised at what you'll find.

But really, Putin now has a foot in the door of the White House.....what now?

1. By the end of the first year the GOP will ask Trump to resign. He refuses.

2. By the end of the second year, Trump will resign.