It's a race to the finish -- which will topple Trump first, Mueller or The Women?

In light of the "#Me Too" movement, I'm cheering for the ladies.

Not since the era of Donna Rice, Fawn Hall, and Jessica Hawn has there been such a career-ending powerful trio of beauties as Karen McDougal, Stormy Daniels, and Summer Zervos. But this time, there's no Gary, Ollie, and Jim. Just Donnie. It's alllllll Donnie. 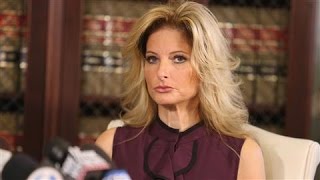 One of my favorite passages from Fire and Fury was a Bannon quote about Trump's lawyer Marc Kasowitz and how he "took care" of at least 100 women during the campaign. And I don't think he was talking about making them chicken soup.

And we now know Trump's oily Consigliere Michael Cohen spends his days bullying and threatening Trumps victims/lovers, including threats of violence. Sometimes against a Trump girlfriend, sometimes against one of their lawyers. CNN has more:

"Attorneys defending Trump and his personal lawyer, Michael Cohen, filed a lawsuit last week alleging Daniels violated a nondisclosure agreement 'as many as 20 times,' and could owe in excess of $20 million as a result.

"'Now we have a sitting US president, Chris, who is threatening to sue a private citizen for over $20 million for talking about their relationship,' Michael Avenatti told CNN's Chris Cuomo on New Day. 'It's remarkable. I don't think it's ever occurred in the history of the United States.'

"Avenatti went on to criticize Trump's legal team, led by Cohen, for 'engaging in thuggish behavior, threats, intimidation, and hiding the money trail.'"

A couple of days later Avenatti and Cohen had a televised verbal battle that would be topping every newscast for days, but this is the age of Trump. Nothing is shocking anymore. It's like season eight of The Walking Dead. The zombies just don't pack the same psychological punch they did in season one.

Kathy never expected a career in radio as a talk show producer. Born and raised in Atlanta, Georgia, Kathy was completing her nursing degree when in 2001 - in an emergency - she was asked to fill in as the producer of Mike's program. Within a few (more...)
Related Topic(s): Bullying; Donald Trump; Donald Trump Narcissist; Evangelical; Women Against Trump; Women In Politics, Add Tags
Add to My Group(s)
Go To Commenting
The views expressed herein are the sole responsibility of the author and do not necessarily reflect those of this website or its editors.