Source: The Guardian
We've seen seasonal spikes in jobs before. The underlying story is a weak US economy that will be hurt by sequester cuts 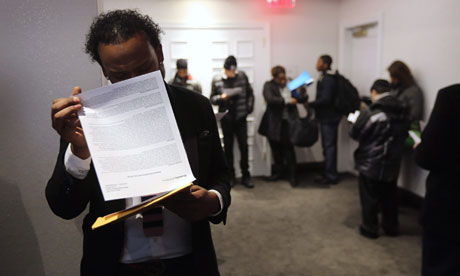 More than five years into the downturn, it doesn't take much to get people excited about the state of the economy. The Labor Department's February employment report showing the economy generated a better than expected 236,000 jobs and the unemployment rate had fallen 0.2 percentage points to 7.7% was sufficient to get the optimists' blood flowing. Unfortunately, they are likely to be disappointed.

While most economic measures implied that the economy had suddenly shifted from hot to cold, the more obvious explanation was that unusually good winter weather in the US northeast and the midwest had pulled hiring forward, as some of us warned at the time. This is likely part of the story this year, as well.

While few people in the northern part of the country have been sunbathing in January and February, we did not see the sort of severe snowstorms or sub-zero weather that typically leads to a few days without work in at least part of the region. This likely explains the 48,000 job growth reported for construction in February, as well as higher than expected growth in retail and temporary employment.

The drop in the unemployment rate is also not as good news as it may initially seem. The Labor Department reported that 130,000 people left the labor force during the month -- so they are no longer counted as unemployed. The percentage of the adult population that is employed (the employment-to-population ratio, or EPOP) was unchanged at 58.6%. This is just 0.4 percentage points above the low hit in the summer of 2011; and it is unchanged over the last year.

The one genuinely encouraging piece of news in the February employment data is an uptick in wage growth. Over the last three months, average hourly earnings rose at a 2.85% annual rate, compared to the prior three months. If this continues, it would imply that workers are actually seeing real wage gains. Unfortunately, this increase was likely driven by some state minimum wage hikes, and by the sort of random movements that causes these data to fluctuate erratically. But this is an item that the optimists can look to for hope.

Looking beyond this report, though, there is not much reason for optimism. Housing construction is rising, but from a very low base. It had fallen back to just 2.0% of GDP, so even a 20% growth rate would add just 0.4 percentage points to GDP growth. The most recent data on investment shows a sharp drop, albeit after three months of good growth. We will be fortunate if this category grows at more than a 10% annual rate in 2013.

While an upward revision to the fourth quarter GDP data turned a negative 0.1% into a positive 0.1%, the economy still only grew at a 1.6% annual rate in the second half of 2012. Apart from the uptick in construction, there are few good reasons to expect much of an acceleration from this growth rate. And contrary-wise, the ending of the payroll tax cut will pull more than $100bn a year out of the economy. The impact of this tax increase was just being felt when the February jobs survey was taken in the middle of the month.

The other big hit to the economy will be from the sequester, which will pull roughly $80bn in federal spending out of the economy. The forecasts from the Congressional Budget Office and others show the sequester slowing growth by 0.5-0.6 percentage points. The economy has not even begun to feel the impact of these cuts, most of which will not start to make their effects felt until April.

In short, we have an economy that had been growing at a not-very-healthy pace through the second half of 2012 -- and which is virtually certain to be slowed by contractionary fiscal policy through the rest of 2013. Unless there is a rapid reversal of policy, the 7.7% unemployment rate is likely to represent a low we may not see again for some time.

Dr. Dean Baker is a macroeconomist and Co-Director of the Center for Economic and Policy Research in Washington, D.C. He previously worked as a senior economist at the Economic Policy Institute and an assistant professor at Bucknell University. (more...)
Related Topic(s): Economic; Housing; Jobs; Recession; Sequester; Unemployment Rate, Add Tags
Add to My Group(s)
Go To Commenting
The views expressed herein are the sole responsibility of the author and do not necessarily reflect those of this website or its editors.