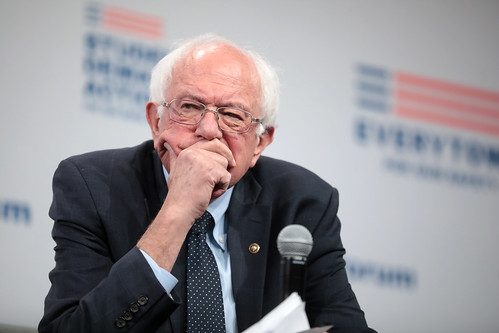 Watching panicky corporate-owned Democrats twist on the devil's fork of Bernie Sanders' "political revolution" is almost as much fun as it must have been for my mom and her fellow villagers to watch Vichy collaborators and Nazi sympathizers being executed by the resistance at the end of World War II. (That, Chris Matthews, is how you do a Nazi-to-2020 metaphor.)

Centrist/moderate/Third Way Dems are afraid of Bernie, not because he would lose to Trump or inverse-coattail down-ballot candidates, but because they would lose their longstanding minority control of the party apparatus. After the convention in Milwaukee, for example, the nominee gets to choose the new DNC chairman. Sanders will not keep Tom Perez.

Electability, however, is the moderates' supposed chief concern. And enough moderate Democratic voters are buying it to make it A Thing.

Don't worry, centrists. The data is clear. As it they did throughout 2016, head-to-head matching polls show Bernie defeating Trump by a comfortable margin.

More to the point, you can't trust corporate media outlets that describe Sanders' policy agenda as radical or extreme. I wish he were! He's a classic liberal Democrat, not as ambitious as FDR or LBJ, more like Humphrey or Mondale.

And that's just on domestic economic issues. On foreign policy, Bernie Sanders is no progressive. In fact, he is to the right of where the Republican Party was before Ronald Reagan.

He acknowledges it was a mistake but he voted for George W. Bush's 2001 invasion of Afghanistan. He voted several times in favor of funding the Afghanistan and Iraq wars. He favors military interventions like those against Syria and Libya, albeit in a limited fashion. He is less critical of Israel than most progressives. He is OK with drone assassinations.

Sanders is basically George W. Bush plus deadlines minus the invasion of Iraq. No real "socialist" shares his views. Socialists, democratic or otherwise, are anti-interventionist. So why are centrists so freaked out?

The answer, obviously, is his domestic platform. But even that is relatively moderate if you take a hard look at it.

Bernie Sanders wants to raise the federal hourly minimum wage to $15. That movement goes back at least to a strike by fast-food workers in 2012. Seven big states and several major cities including New York and San Francisco, have already instituted $15.

Over the last eight years, of course, inflation has eaten away at the value of those $15. Meanwhile, corporate profits have risen. And it would be at least another year until a President Sanders could theoretically sign a bill. At the official, ridiculously understated-from-reality inflation rate, $15 in 2012 will be equivalent to $17 in 2021. If the inflation rate were still calculated the same way as a few decades ago, the minimum wage would be at least $25 in order to be worth the same as it was in 1970. If it were up to me, I'd start the discussion at $50.

Looking at it from a historical vantage point, Bernie's proposal is too little, too late for workers. It isn't radical and it won't tank the economy -- New York and San Francisco are proof of that.

Sanders wants to forgive all $1.6 trillion of student loan debt and make college tuition and fees free at public four-year colleges and universities. Let's take those two ideas one at a time.

Financial aid budget cuts, soaring tuition and high interest rates have made student loan debt explode. In 1999 it totaled $90 billion -- adjusted for inflation, 8.7% of the current total. In 1986 it was$10 billion -- and that's after the Reagan Revolution replaced almost all student grants with loans.

Related Topic(s): Bernie Sanders; Bernie Supporters; Centrist Centrism; Democrats; Healthcare; Radicals; Students, Add Tags
Add to My Group(s)
Go To Commenting
The views expressed herein are the sole responsibility of the author and do not necessarily reflect those of this website or its editors.