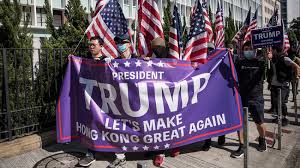 Today is Pentecost Sunday - the originally Jewish harvest festival that comes 50 days after Passover. The day's readings remind us that from the beginning Jesus' Jewish followers were working-class internationalists. Despite their lack of what the world calls "sophistication," they recognized a unified divine order where barriers of language, nationality, and differentiating wealth were erased.

Before I get to that, let me connect that central fact with perhaps the prominent international and class-based concern in our contemporary context. I'm referring to the demonstrations in Hong Kong and an emerging new cold war between the United States and China. Our Pentecost Sunday readings suggest we should be standing with the Chinese government and not with our own.

Last week I shared a summary of an important debate about China between Matt Stoller and Kishore Madhubani. The debate's question was: Is China merely a competitor of the United States or is it an adversary or even an enemy? Doesn't China's suppression of free speech and free press, of religion and of democracy make it an enemy?

My article held that, all things considered, China is a more genuine defender of human rights than the United States. I won't repeat my argument here, but it turned on the distinction between bourgeois human rights (private property, contract observance, free speech, free press, and freedom of religion) and socialist rights to work, food, shelter, clothing, health care, and education.

Since the publication of my column, its relevance was highlighted by renewed demonstrations in Hong Kong. There despite a COVID-19 lockdown with its social distancing requirements, demonstrators came out in force last Sunday. They were protesting against new legislation in the territory that would allow officers of the law to arrest protestors for speaking out against the local government or authorities in Beijing.

So, the question became how should progressives respond? Even granted the distinctions between bourgeois and working-class rights, shouldn't leftists seeking consistency and coherence, be on the side of the Hong Kong protestors? After all, they're described as "pro-democracy."

Despite such description, my answer would be a resounding "No."

The main reason for my position is related to the class concerns reflected in the above distinctions between bourgeois and working-class rights. The fact is, all demonstrations are not the same. Some are organized against oppressive systems such as capitalism and its prioritization of wealth accumulation and contract obligations on the one hand and its marginalization of workers' needs to eat, be decently clothed and housed, and to have dignified work and a healthy environment on the other. The Yellow Vest Movement in France and the Water Protectors' demonstrations against the Keystone XL Pipeline in North Dakota offer examples of protests against capitalist exploitation.

In contrast, other demonstrations are reactionary and directed against specifically working-class reforms. Participants typically support colonialism and imperialism. The thousands in the streets of Hong Kong and Venezuela offer prime examples of such protests. Hong Kong protestors' waving of Union Jacks signals their preference of the status quo ante of British colonialism. Their appeals for U.S. intervention (with U.S. flags unfurled) express support for imperialism.

(Of course, especially under the guidance of foreign interventionist forces such as the CIA and its sister National Endowment for Democracy (NED), other lower-class social forces such as unemployed and underpaid workers (Marx's lumpen proletariat) can also be organized by their betters to direct their anger at the class enemy of their bourgeois organizers -- in this case, the Chinese government in Beijing.)

The bottom line here, however, is that to be consistent, progressives must oppose not only prioritization of wealth accumulation by financiers, but also anything connected with colonialism and imperialism.

To repeat: not all demonstrations, not all clamoring for "human rights" are created equal. Class-consciousness provides an indispensable tool for distinguishing the causes and demonstrations that progressives should support from those we should oppose.

Related Topic(s): Capitalism; China; Colonialism; Democracy; Demonstrations; Freedom; God; Hong Kong; Imperialism; Jesus; (more...) Rights; Socialism; Spirit; Sunday; Support Of The People; Trump, Add Tags  (less...)
Add to My Group(s)
Go To Commenting
The views expressed herein are the sole responsibility of the author and do not necessarily reflect those of this website or its editors.