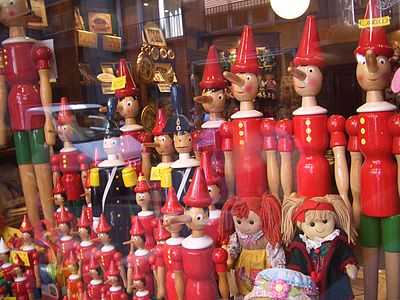 Pinocchio dolls in a shop window in Florence. Photo by Vladimir Menkov. Dual-licensed under the GFDL and CC-By-SA-2.5, 2.0, and 1.0.
(Image by (From Wikimedia) Vladimir Menkov, Author: Vladimir Menkov)   Details   Source   DMCA

Not all of them. Not every time. But most of them, from both "major" political parties, lie. A lot.

Perhaps I'm too cynical, but I'm not sure it's coincidence that the examples politicians offer tend to be drawn from content posted by their political opponents.

US Representative Alexandria Ocasio-Cortez (D-NY) is a notable exception. She asked Facebook CEO Mark Zuckerberg if Facebook would let her target Republican politicians by running ads falsely accusing them of voting for her "Green New Deal" proposal (Zuckerberg said he couldn't answer "off the top of his head").

On the other hand, AOC's own take seems a bit naive. "So you will take down lies or you won't take down lies?" she asked Zuckerberg. "I think this is a pretty simple yes or no."

Let's use the Green New Deal as an example.

If a Facebook employee has to "fact check" an ad asserting that the proposal would "tank the American economy," how should that employee evaluate the truth or falsehood of the claim?

What criteria should that employee use for deciding what "tank" means? Is slow economic growth "tanking?" Or would it take a recession or depression to meet the threshold?

Should that employee rely on analyses from the Heritage Foundation? Or perhaps from People for the American Way? Or the Congressional Budget Office? Or the Office of Management and Budget? Four sources, likely four wildly conflicting sets of claims and projections.

For a conflicting ad claiming the Green New Deal would "boost the American economy," should that employee "fact check" the ad using the same sources as for the original ad, or different sources? Would 1% growth of GDP constitute a boost? If not, what number, applied to what metric, would?

What if both ads fail the "fact check?" Should the public just flip a coin and vote accordingly, since the two sides are forbidden to offer us their takes to evaluate and decide between for ourselves?

Politics consists of conflicting narratives. No two opposing narratives can both be true. In fact, both could be false (Spoiler: Both are probably at least partially false, intentionally or not; personal biases affect politicians' beliefs, and ours, at least as much as facts do).

Related Topic(s): Facebook; Facts; Mark Zuckerberg, Add Tags
Add to My Group(s)
Go To Commenting
The views expressed herein are the sole responsibility of the author and do not necessarily reflect those of this website or its editors.