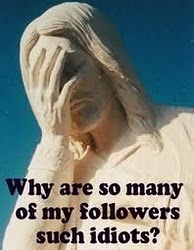 The hardest part about being an Atheist is the lack of belief in Hell. Were there an actual, tangible, verifiable locus of eternal torture, excruciating agony, unspeakable suffering complete with an authentic bottomless lake of fire, then recently deceased Georgia State Representative Bobby Franklin (R/Lunatic) -- who never met a cross he didn't want to ignite -- would now be flailing in a lava pit while tiny clawed demons chewed off the remains of his charred flesh.

But, sadly, I don't believe in Hell. Maybe it's enough that Bobby does. Or did, rather. It speaks volumes about his popularity that Bobby was found dead in his North Cobb County (Atlanta) Georgia home last Tuesday (foul play is not suspected) and the story received scant coverage; most major local news outlets didn't mention his name. What can you say about a guy who wanted to criminalize miscarriages, forcing women who lost their babies to submit to vaginal exams to prove they didn't "murder" their unborn fetuses?

In H.B. 1: "Prenatal Murder," his pet bill, it would've been a crime for the female human body to end a pregnancy if an investigation team (which could include clergy and law enforcement) could not determine a cause for the pregnancy's termination. Oh, and the punishment? A death sentence. That's right. Eye for an eye and all that. Can't prove you unintentionally/accidentally miscarried your infant? Off to the gallows. Or the stoning courtyard, if Bobby had had his way. Pro-life and pro-death, just your typical good schizophrenic uber-Christian.

He was similarly popular for his attempt to redefine and de-criminalize rape by changing the legal terminology of that crime so that a woman would have to go to extreme lengths to prove she had been assaulted. Even then she would not be considered a "victim," only an "accuser." There would be no crime of "rape" in Bobby's world, and therefore no such thing as a rape victim. The fundamentalist Afghans would've loved this guy. For a fine upstanding gentleman who claimed to follow the teachings of Jesus, Franklin sure espoused the kind of medieval misogynistic views of women usually reserved to the Taliban.

At the same time -- in typical hypocritical NeoCon fashion -- he was advocating for smaller government, while expanding law enforcement and the judiciary to include a posse of Uterus Police.

Many Southerners would've forgiven ol' Backwoods Bobby his woman-hating antics; he is from the same area that gave us Bob Barr and Newt Gingrich after all, but he went a bridge too far for even the farthest-right Georgia Cracker Teabagger when he Tweeted that he was upset about all the recent idolatry and was specifically "saddened to watch my fellow Georgians pray to their god, FEMA, to save them," following last Spring's deadly tornadoes that ravaged the region, leaving hundreds dead across the South-Central US. Maybe he just didn't believe in victims, be they rape victims, miscarriage sufferers, or victims of other natural disasters.

But the problem was, Bobby wasn't picking through the rubble, or handing out potable water and diapers -- FEMA was.  Some survivors of that horror called him a creep and an uncaring monster. Certainly there was no compassion in this particular conservative.

Why spend time discussing the life and crimes of a minor player in the vast field of problematic politicians who pack a more powerful punch? Because Bobby is emblematic of the future. He was not a flash-in-the pan political idiosyncrasy. He "served" for 15+ years and he was only 54 when "God called him home."  No doubt he would've continued in the Congress and perhaps set his morally superior sights on heavenly ascension to national office.

In this era where religious nut jobs like Michelle Bachmann enjoy successful political careers and are seriously considered Presidential contenders, despite their admittedly outrageous beliefs, the Bobby Franklins who remain on the lower rungs of political purgatory serve as a cautionary tale. These are the minions a President Bachmann would draw on to fill her Cabinet of Christian Crusaders. We cannot discount them or their rabid followers. It's the New Christian Hate-movement that has permeated Washington DC with it's pastor-Hagee style legislative agenda that would demolish civil liberties, women's rights, labor rights, gay rights and impose a Biblical law that rivaled the S'haria law these hypocrites claim to abhor but secretly envy.

This unholy marriage of the kind of "Christianity" that would make Jesus cringe coupled with extreme right Teabagger/libertarian political philosophy that is typified by a Bobby Franklin could be coming to a State Legislature near you. Or to the Governor's Mansion, Capitol Hill, Federal Bench, or Oval Office.

After all, who would've believed that a woman who was preemptively "exorcised" -- on camera -- by an African Priest to relieve her of invisible tormenting demons that were poised to infect her spirit would actually become the GOP's sanctioned Vice Presidential nominee??? The Republican Bosses looked at all the possible McCain ticket co-contenders and chose the battiest of the bunch, then sold her like a bag of Fritos to the American public. If that can happen, how far are we, Truthseekers, from electing a President who will make sure Congress or the Supremes reverse Roe v. Wade and keep going until abortion is a crime punishable by the death penalty?

Or from de-funding FEMA and the FAA and HHS and OSHA and all other entities that seek to help the working class or working poor or the utterly helpless or disaster victims, because, y'know, that's just liberal nanny-state thinking? We're Bootstrap Pullers, dammit! Pray to God for help from that earthquake, not FEMA! If you're on the street with your children because your husband beat you and the kids and you've nowhere to go? Tough. Wrong choice, Dearie. No food stamps for you -- STARVE! as "Rev." Hagee would say. Ask God to provide, not Medicaid!

But you'd be guaranteed High School biology books free from that nasty evolution garbage, with references instead to the Flood and Jesus riding a T-Rex. A copy of the Ten Commandments in every courtroom and a Library Censor for every school book. That's the future if the Franklins and Bachmanns and Palins and their Teabaggin' supporters have their way.

Kathy never expected a career in radio as a talk show producer. Born and raised in Atlanta, Georgia, Kathy was completing her nursing degree when in 2001 - in an emergency - she was asked to fill in as the producer of Mike's program. Within a few (more...)
Related Topic(s): Abortion; Republican, Add Tags
Add to My Group(s)
Go To Commenting
The views expressed herein are the sole responsibility of the author and do not necessarily reflect those of this website or its editors.