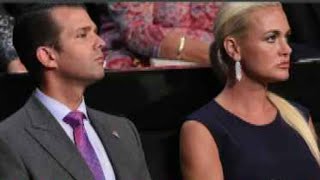 "Vanessa Trump hired a criminal defense attorney to represent her in her divorce from Donald Trump Jr. just as special counsel Robert Mueller subpoenaed the president's family business, The Post has learned.

"Feureisen is best known for securing the release of a New York man named Anthony DiSimone from federal prison in 2007 after a judge overturned a murder conviction related to a bar fight in 1994."

The former couple say the divorce will be uncontested, which makes this hire even more curious. Only days ago, Page Six reported the pair were living separate lives and she was fed up with his obnoxious social media:

"An issue, two of the sources say, is that Don Jr. 'appears to have changed recently, and friends are concerned about him.' Their concerns were increased by Don Jr.'s tweeting, including when he liked a tweet linking antidepressants to mass murder, and another liking a tweet attacking a teen survivor of the Stoneman Douglas High School shooting. The Daily Beast also reported that following the school shooting, Don Jr. urged his dad to stay strong on gun rights and hold firm against any assault weapons ban.

"Previously at Halloween, Don tweeted that he would take away half of his 3-year-old daughter's Halloween candy because he wrote, 'it's never to [sic] early to teach her about socialism.' Then after his recent trip to India, he was heavily criticized for his tone-deaf remark praising the country's poor because 'There's still a smile on a face.'"

Between the stress of the divorce and special counsel Robert Mueller's recent subpoena of the Trump Organization, it's hard to see Junior mellowing out.

Related Topic(s): Divorce; Donald Trump Junior; Vanessa Trump, Add Tags
Add to My Group(s)
Go To Commenting
The views expressed herein are the sole responsibility of the author and do not necessarily reflect those of this website or its editors.