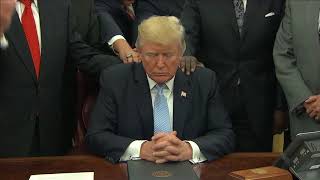 Faith leaders put hands on Trump and pray. But does he pray?
(Image by YouTube, Channel: Washington Post)   Details   DMCA

If he does, to whom or what or for what does he pray?

In fact, until recently, it never entered my mind that he prays, nor did I much care. I think the Founding Fathers got it right when they separated church and state, prayer and politics. To me, it's more important that a president have a solid moral foundation, a sense of right and wrong, a capacity for compassion and a generous dose of humility. I would hope it would be someone with the common sense to realize that, if there is a god, he or she is not it.

But now I want to know. Does Trump pray? I want one of those "enemies of the people" to ask him next time he holds a press conference as he's rushing to a helicopter: "Mr.

President! Do you pray!? Rick Perry says you're 'God's chosen one!' Do you pray, sir!?"

The questions would have to be shouted to be heard over the helicopter noise, which might seem a tad inappropriate to some, given the context, but given the noisy tenor of this presidency, it seems reasonable to me. I don't think God would mind.

Normally, I'd say a president has the right to some privacy on such matters, sharing or not sharing any religious practice or belief according to comfort level. But there is nothing normal about this presidency and Perry, bless his uncluttered mind, has made the issue relevant. The departing Energy Secretary and former governor of Texas (George W. and 1,2, umm 3, Rick way to go, Lone Star) said in a recent interview that "God uses imperfect people through history. King David wasn't perfect. Saul wasn't perfect. Solomon wasn't perfect. And I actually gave the president a one-pager on those Old Testament kings about a month ago. And I shared it with him and I said, 'Mr. President, I know there are people who say that you say you were the chosen one.' And said, 'You were.' I said, 'If you are a believing Christian, you understand God's plan for the people who rule and judge over us on this planet in our government.' "

So, is Trump "a believing Christian?" Does he believe, as Perry and other evangelicals do, that God has sent an amoral dunce to foster chaos and violence upon the planet, so as to be able to ultimately deliver the "true believers" out of the ruins to the Kingdom of Heaven?

This is, I believe, a legitimate question, since it is the rationale being used by so many of his followers (as in a cult) to justify their support for every act of his that is considered sinful, evil, immoral, blasphemous by pretty much every other religious doctrine and most non-believers as well. In fact, I think most non-believers were done with Trump a long time ago and have trouble understanding any god that would choose someone like Trump for any Divine purpose.

While we're at it, what does Trump think, as Perry alleged, is "God's plan for the people who rule and judge over us on this planet in our government?'" That's kind of an important question. Is all this corruption and dismissal of the rule of law to be considered part of "God's plan?" Does one have to simply accept it, like it or not, as most Republicans have, because to reject it would be to forfeit any shot at being among those chosen at the Rapture?

Do you see how smart the Founding Fathers were to want none of this in their government?

So, back to prayer. Trump recently hired a television evangelist to be a faith liaison in the White House. She happens to be an attractive blonde. God's will, I assume. I think Trump's true talent is being able to identify and recruit other masters of the con, charlatans who shamelessly make declarations that most people would dismiss, even ridicule, as absurd because they know that some people, enough people "true believers" will take them seriously.

Send me your paycheck and reserve a seat on the flight to Heaven. Also, let me fly there on my own private jet as one of God's chosen messengers. With my whole family, of course.

Related Topic(s): Corruption; Donald Trump; Evangelical; Evil; Faith; God; Non-believers; Prayer; Presidency; Reporters; (more...) Rick Perry; The Chosen One; The Rapture, Add Tags  (less...)
Add to My Group(s)
Go To Commenting
The views expressed herein are the sole responsibility of the author and do not necessarily reflect those of this website or its editors.