From Beat The Press Blog 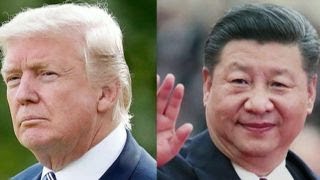 With Donald Trump's trade war with China heating up I thought I should bring in Mr. Arithmetic to clarify the situation. Trump apparently thinks that he holds all the cards in this one because the U.S. imports much more than it exports to China.

As I pointed out previously, China has other weapons. For example, it can just stop respecting U.S. patents and copyrights altogether, sending items all over the world that don't include any royalty payments or licensing fees. This could reduce the price of patented drugs by 90 percent or more and make all of Microsoft's software free.

But even ignoring the other weapons that China has in a trade war, the idea that the country can't get by without the U.S. market doesn't fit the data. At the most basic level, China exported a bit more than $500 billion in goods and services to the United States last year. This comes to a bit more than 4.0 percent of its GDP, measured on a dollar exchange rate basis.

But let's ignore this issue. Suppose Donald Trump's get tough trade policies reduce our imports from China by 50 percent, a huge reduction. This would come to roughly 2.0 percent of China's GDP. Will this have China screaming "uncle?"

Probably not, as Mr. Arithmetic points out, China's trade surplus fell by 4.4 percentage points of GDP from 2008 to 2009, yet its economy still grew by more than 9.0 percent that year and by more than 10.0 percent the next year. While all of China's annual data should be viewed with some skepticism, few doubt the basic story. China managed to get through the recession without a major hit to its growth.

Of course that drop in exports was due to an unexpected economic crisis, this one would be due to a politically motivated trade war. Mr. Arithmetic does not expect China to be giving in any time soon.

Dr. Dean Baker is a macroeconomist and Co-Director of the Center for Economic and Policy Research in Washington, D.C. He previously worked as a senior economist at the Economic Policy Institute and an assistant professor at Bucknell University. (more...)
Related Topic(s): China; China Politics; Domestic Spending; Economy; Exports; Imports; Tariffs; Trade, Add Tags
Add to My Group(s)
Go To Commenting
The views expressed herein are the sole responsibility of the author and do not necessarily reflect those of this website or its editors.