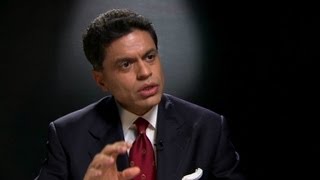 Fareed Zakaria shows his extraordinary dishonesty by maintaining that it is racist to represent the interests of white people, but not racist to represent the interests of black people or other non-white people. He adds to his dishonesty by claiming that it is difficult to know who is white and who isn't, but this problem doesn't exist for black people or for people from India in the case of affirmative action. For Fareed, the category white is not firm, but the category black is firm enough for affirmative action.

What we are experiencing in the United States and other countries whose core populations are white is the removal of white people, especially males, from leadership positions. They are being shoved aside and foreign born immigrants such as Fareed Zakaria take their place.

Look around and you will see leadership positions filled by people who would not have been recognized as American by earlier generations of Americans. America has been stripped of its cultural consciousness. The US has become a Tower of Babel, a territory that has lost its identity and is disunited by the Identity Politics created by diversity and multiculturalism. Without unity there is no country.

We hear much about America's external empire -- UK, Europe, Canada, Australia, Japan. What I am suggesting is that the United States itself has become an internal empire of antagonistic races, ethnicities, cultures, religions, genders, and agendas. As empires are unstable, the US is doubly so.

The decision to deep-six the immigration policy of assimilation was a conscious decision to disunite the country. Diversity coupled with reverse discrimination dispossessed the core population of their country. It was an act of national suicide.

Related Topic(s): Dominicans Hate Black People; Donald Trump; Fareed Zakaria; Racism; Trump Racist; United States, Add Tags
Add to My Group(s)
Go To Commenting
The views expressed herein are the sole responsibility of the author and do not necessarily reflect those of this website or its editors.