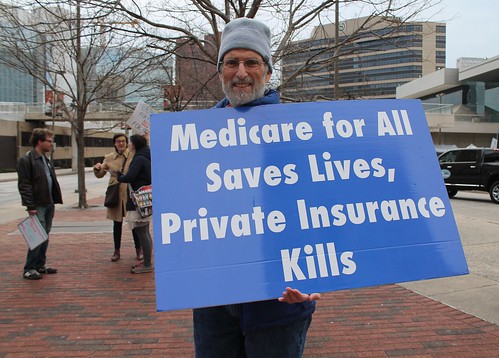 42a.SinglePayer.Protest.Baltim oreMD.11February2017
(Image by Elvert Barnes)   Details   DMCA
Over the past 7 years Republicans have regularly voted to repeal all or part of the Affordable Care Act (ACA/Obamacare). Those repeal votes were cheap talk as long as Republicans could count on a Democratic President's veto. But now, to their surprise, they have their very own President Trump eager to fulfil his campaign promise to eliminate the ACA, and they can't agree on a replacement.

They know the American public won't tolerate going back to the status quo before Obamacare (back when we had what Mitch McConnell ignorantly described as "the finest health care system in the world"). Obamacare brought several major improvements to America's health care system, and most people today want to keep them.

It banned insurance companies from denying coverage or charging higher premiums for pre-existing conditions, and from setting a lifetime limit on how much an insurer has to pay for covered benefits. In the good old days, many people were unaware that a single bout of cancer could leave them bankrupt after their policies maxed out.

Obamacare also required allowing adult children to stay on their parents' policies until age 26. It put a cap on insurance company profits and limited premium differences between old and young. Through its subsidized insurance exchanges and expansion of Medicaid eligibility, it "reduced the number of uninsured Americans by an estimated 20 million people from 2010 to 2016" (NYT 1/13/17). However, it still left more than 27 million uninsured (more than the combined population of Belgium and Netherlands).

The problem for Republicans is that these very popular features of Obamacare require a lot of government supervision and expensive subsidies for those who cannot afford the care they need. The current GOP is an anti-government party that does not believe health care is a right that should be guaranteed by the government.

The problem for Democrats is that, although their 2016 Party platform reaffirms the traditional Democratic belief that health care is "a fundamental right for every American," they haven't been willing to commit to reforms that would implement this right. Instead, the platform suggested tweaking Obamacare. However, if health care is a right, then a system that leaves 27 million uninsured fails to respect that right. "Additionally, underinsurance is an increasing, often overlooked problem," says Dr. Jessica Schorr Saxe of Physicians for a National Health Program:

"According to the Commonwealth Fund, this included 21 percent of adults below Medicare age in 2014. More than one-third of Americans did not get needed care due to financial barriers, and more than one-third have trouble paying a medical bill. Free clinics, which expected declining numbers after the ACA, are seeing an influx of insured patients who cannot afford co-pays or deductibles."

The U.S. pays much more for health care than other high-income nations, but gets much less. In its recent survey of health care in 11 high-income countries (Australia, Canada, France, Germany, the Netherlands, New Zealand, Norway, Sweden, Switzerland, the United Kingdom, and the United States) the Commonwealth Fund reached this conclusion:

"In comparison to adults in the other 10 countries, adults in the U.S. are sicker and more economically disadvantaged. . . .Although the U.S. has made significant progress in expanding insurance coverage under the Affordable Care Act, it remains an outlier among high-income countries in ensuring access to health care. The authors point out that all of the other countries surveyed provide universal insurance coverage."

The argument over retaining, tweaking or repealing the ACA is a distraction. If health care is a right, then we must have a national program to secure health care for everyone. There is a bill in Congress that would do just that: H.R.676 - Expanded & Improved Medicare For All Act, introduced by Rep. John Conyers (D-MI) with 59 cosponsors.

Medicare as it now exists is a program for the elderly that 77% of Americans consider "very important" (second only to Social Security), and 75% of recipients say is working well. It is (mostly) a single-payer system in which a government-administered fund pays for services delivered by private hospitals and practitioners. H.R. 676--Medicare for All would create a universal and much more comprehensive single-payer system.

Like the Canadian single-payer system and our current Medicare, it would drastically reduce (by hundreds of billions of dollars) the administrative costs imposed on doctors' offices and hospitals by the multiple forms and rules of competing private insurers. It would also (as in Canada and Europe) help patients by reducing drug prices through direct negotiation with pharmaceutical companies. These savings would enable the U.S. to cover those uninsured 27 million, and greatly expand coverage for everyone.

Even Donald Trump saw this back in 2000, when he wrote in What America Deserves that "We must have universal health care. Just imagine the improved quality of life for our society as a whole. The Canadian-style, single-payer system in which all payments for medical care are made to a single agency (as opposed to the large number of HMOs and insurance companies with their diverse rules, claim forms and deductibles) helps Canadians live longer and healthier than Americans."

According to a recent Gallup poll (5/16/16), 58% of Americans (73% of Democrats and 41% of Republicans) favor replacing the ACA "with a federally funded healthcare system that provides insurance for all Americans." Yet Hillary Clinton's majority in the Democratic National Platform Committee voted against single-payer, ignoring the overwhelming preference of Democrats.

The DNC's vote and Hillary's refusal to endorse single-payer during the presidential campaign were vivid reminders that the Democratic establishment was still putting the for-profit health care industry ahead of people's health. Will it do any better in 2018?