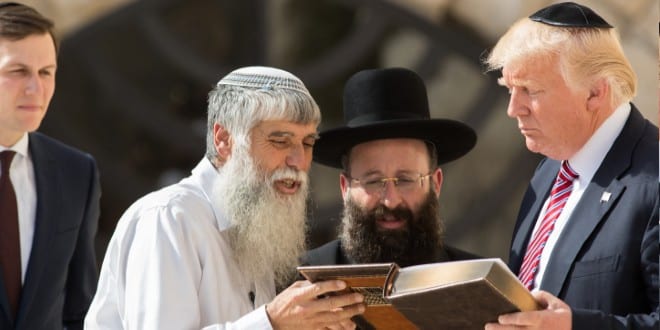 Tuesday's signing of the Abraham Accord at the White House by Israel, Bahrain, the United Arab Emirates and the US is being hailed and mislabeled as a peace agreement. Donald Trump and his partner in crime, Israeli PM Netanyahu, are being promoted as being worthy of a Nobel Peace Prize due to the Abraham Accord.

The Abraham Accord states in part,

Recognizing that the Arab and Jewish peoples are descendants of a common ancestor, Abraham, and inspired, in that spirit, to foster in the Middle East a reality in which Muslims, Jews, Christians and peoples of all faiths, denominations, beliefs and nationalities live in, and are committed to, a spirit of coexistence, mutual understanding and mutual respect;

The above statement from the Abraham Accord is based, not on fact, but on an ancient Jewish religious myth. The primary myth is Abraham himself. There is no evidence that Abraham ever existed. He is a construct of ancient Jewish rabbis to give the Jews possession of land that belonged to other people, the Canaanites. It was also used in ancient times by one group of Jews against another group of Jews in a dispute over land ownership. Today this ancient Jewish myth is being used to give the Jewish state of Israel possession of land that does not belong to Israel, the Palestinian West Bank and Palestinian East Jerusalem.

It upends all the political assumptions going back over 30 years. The notion of territory for peace has been hardwired into the process for 70 years. We didn't give up a single millimeter of Eretz Yisrael (land of Israel) for this peace agreement. Also, for all this time people have been claiming that the core conflict in the Middle East was the Palestinian conflict. And that the core of the Palestinian-Israeli was Jerusalem and the settlements. All that has been dispelled by these agreements.

Oren went on to expose the most important reason for the Abraham Accord, Iran. He said the Abraham Accord "also allows Israel and these moderate Arab countries to establish a strategic alliance against Iran." Oren also pointed out the importance to Israel of Trump reneging on the nuclear agreement with Iran, when he said, "If America went back to the Iran deal, it would stop the peace process dead."

Neocon warmonger Nikki Haley, the former US ambassador to the United Nations, praised Donald Trump for bringing about the Abraham Accord. She said, "Rather than focus on the Palestinians, which is what every president has thought they had to do to negotiate peace, he focused on Iran." She regurgitated the Israel/neocon (neoconservatism works to establish a world based on the Hebrew Bible/Old Testament) talking point that terrorism must be destroyed and "the number one sponsor of terrorism is Iran." This is what Israel and the neocons said about Iraq as they pushed US politicians to start the Iraq War, a war that was started and fought for the benefit of Israel, and for the benefit of the US politicians from both parties who depend on the powerful Israel lobby to selfishly promote their political careers.

The fact that in the 21st century major world powers are naming an international agreement on the ancient Jewish myth of Abraham, should be concerning for any thinking person. Not only does it show ignorance of the parties involved regarding Abraham, real or imaginary, who the Hebrew Bible/Old Testament claims was married to his half-sister, Sarah, and who pimped his wife/sister twice. His motives for pimping Sarah, first to the Pharaoh at Genesis 12:10-20 and then to Abimelech king of Gerar at Genesis 20:2-18, were fear and greed/material gain.

The ancient mindset of the ungodly religious violence promoting Hebrew Bible/Old Testament is what underlies Israel. One of the many things that makes this evident is Israeli PM Netanyahu's speech at the signing ceremony of the Abraham Accord at the White House when he referred to Jerusalem as "Israel's eternal capital."

Bob Johnson is a paralegal and a freelance writer in Florida. He was raised Roman Catholic, but after reading Thomas Paine's The Age of Reason, he became a Deist. In 1993 he founded the World Union of Deists and in 1996 he launched the first web (more...)
Related Topic(s): Bible; Deism; Iraq; Jerusalem; Jerusalem; Nature; Neocons; Peace_War; People; People, Add Tags
Add to My Group(s)
Go To Commenting
The views expressed herein are the sole responsibility of the author and do not necessarily reflect those of this website or its editors.